The head of Rospotrebnadzor Anna Popova spoke at the International conference on HIV/AIDS in Eastern Europe and Central Asia (EECA). 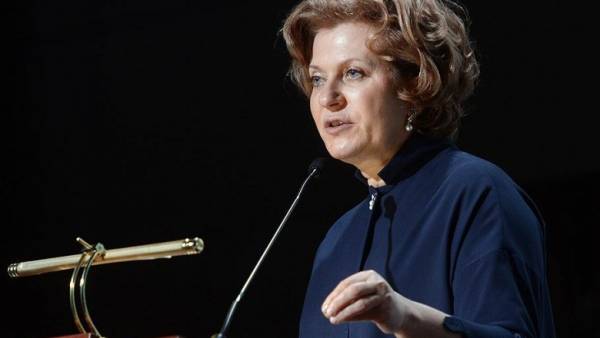 The rate of spread of HIV in Russia began to slow down, said the head of Rospotrebnadzor Anna Popova at the International conference on HIV/AIDS in Eastern Europe and Central Asia (EECA). She noted that in 2017, the growth rate was about 2%, in contrast to 2012, when it amounted to more than 13%.

Wednesday in Moscow the VI international conference on HIV/AIDS in Eastern Europe and Central Asia. The event (held every two years), the organizers are the Federal service and the joint United Nations programme on HIV/AIDS (UNAIDS). Despite regional allocations to EECA, opening the conference officials indicated primarily on the situation in the world.

“Despite active development of diagnosis and treatment, the flourishing pharmaceuticals, HIV infection still poses a serious threat to people around the world, complained Deputy Minister of health Sergey Kraevoy.— HIV infection can affect anyone, including the residents of the prosperous States with high living standards and high-quality medicine”.

“I’m sure in 2030 we will be able to defeat the infection, — said the head of the Duma Committee on health Dmitry Morozov.— But if humanity will not make correct conclusions, we will fight new infections, new challenges”.

“Since the beginning of the epidemic in the world has infected nearly 78 million people, and almost half of these people died, reminded the Deputy Prime Minister Olga Golodets.— The fact that the problem is growing, it is growing worldwide.”

“For over 35 years, HIV infection remains a global public health problem in the world, — said the head of Rospotrebnadzor Anna Popova.— No country in the world has not stopped the epidemic.”

“I see disturbing trends regarding new infections in the region — said the Deputy UN Secretary-General, Executive Director of UNAIDS, Michel sidibé.— I am very concerned and even scared that because what I see today, is that of concentrated populations, the epidemic is rooted in the General population. This is a very scary trend.”

We will remind, earlier in an interview to “Kommersant” Mr. sidibé said that in 2010 the HIV epidemic in Eastern Europe and Central Asia (Armenia, Belarus, Kazakhstan, Kyrgyzstan, Moldova, Russia, Tajikistan, Ukraine, Uzbekistan) increased by 60%, with 80% of new cases of this number registered in Russia.

He also reminded that Russia is the third country in the world in the number of new HIV infections after South Africa and Nigeria.

Speaking about the situation in Russia, MS Golodets noted that “early HIV typically been the lot of people who lead an asocial life, which are associated with a certain lifestyle, now among the infected, we see quite a prosperous family and prosperous people.”

She cited data of Rospotrebnadzor, according to which in Russia are 943 999 people diagnosed with HIV, antiretroviral therapy they receive from 346 thousand. “Since 1987, from the disease in the country died 276 660 people,” she said.

“The main thing we can now say we have achieved a significant reduction in the rate of growth of HIV infection, said Anna Popova.— For the first time in many, many years in 2017, the growth rate was only 2%, while in 2012 it was 13.4%. This is our common achievement, our common effort, but is also a contribution of our conferences, of our actions.”

According to the Federal AIDS centre of the Federal service, for 2017 territorial centres for the prevention and control of AIDS reported 104 402 new cases of HIV infection, excluding identified anonymously and foreign nationals “which is 2.2% more than in the same period of 2016”.

Anna Popova said that Russia has significantly increased the number of HIV testing: “In 2017, surveyed more than 34 million people — almost every fourth resident, the treatment received almost half of people with HIV infection”. However, during a conference of activists of the movement “Patients in control” held a flashmob: they stood in the center of the hall in front of the stage in their white t-shirt was written in red “Stop failures”.

Previously, “Kommersant” reported that in 2017 the website “Interruptions.ru” (the portal has been tracking reports of interruptions in the issuance of necessary medicines, working with reports patients) received 509 reports of shortages of antiretroviral therapy in 45 regions of the Russian Federation that has become a “record figure” for a few years: in 2013 and 2014 reports were received from 23 regions in 2015, from 31, 2016 from 41 regions.