The tourists: five sites under threat

The Philippines and Thailand this year announced the closure of “prevention” of several resorts, is incredibly popular with tourists. 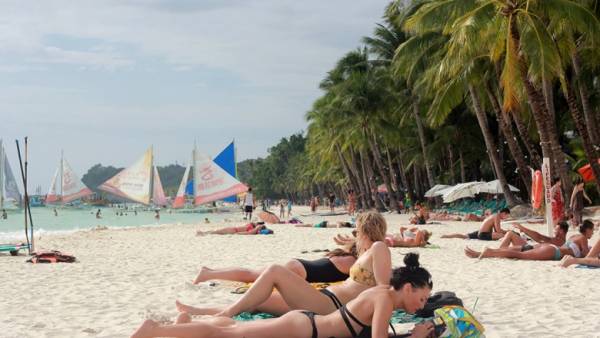 First, Thailand announced that tourists should relax beach Maya Bay, which became famous after the movie “the Beach” with Leonardo di Caprio in 2000.

Later, the President of the Philippines Rodrigo Duterte announced that in late April, the Boracay island will be closed to visitors for six months. Island due to the large flow of tourists, according to Duterte, has become a “cesspool”.

But that’s not all. A number of European cities, including Venice and Dubrovnik and also the Isle of Skye in Scotland have complained that barely survive in the invasion of tourists.

In 2017, the authorities of Barcelona has taken a number of steps to limit the growth in the number of hotels and apartments, which are rented for a short time to tourists through AirBnB and similar resources. The authorities of Barcelona noted that the growth in demand for hotels and rental apartments for tourists, pushing up prices for rental housing for local residents.

Some tourist regions try to control the flow of tourists by raising prices. In Rwanda, for example, now we have to pay 1500 dollars for a day of observations of mountain gorillas.

Bi-bi-si has compiled a list of five popular tourist destinations, the welfare of which is threatened due to the increasing number of visitors.

Thailand: Maya Bay beach will finally get a rest from the tourists

In March, the government of Thailand has announced that it closed four months the famous beach of “prevention”. Maya Bay — a secluded Bay with crystal clear water, white sand and white cliffs. This picturesque area has become popular after the release of the 2000 film “the Beach” with Leonardo di Caprio. Now every day this beach is visited by 4000 — 5000 visitors.

Experts say that 77% of the coral reefs in this Bay are under threat of destruction, mainly corals are damaged by anchors of boats plying here.

It is clear that the four month break “on vacation” from June to September — will not help to completely solve this problem. Does this mean that Maya Bay can’t be saved?

The expert from Bangkok’s Thon Thamrongnawasawat doesn’t think so.

If we believed that it is now too late to do anything about it, we would not have to do anything. We closed one island — Koh Yuung (Koh Yoong) — three years ago, and now the recovery process of corals is very active. We use this experience in the case of Bay Maya Bay and try to transplant the corals. Thon Thamrongnawasawat

Thailand in 2011 has closed a number of beaches that are popular with divers. From mid-2016, also closed Koh Yuung (one of the Islands of the archipelago of Phi Phi) and Tachai (island in the Similan group).

Elizabeth Becker, author of a book about the problems of the tourism industry Overbooked: The Exploding Business of Travel and Tourism says: “I think the decision to close the island’s well-founded. But tourism is one of the driving forces of economic development of the country. And business, and officials fear that any restriction in tourism will endanger the whole economy of the country.”

According to Thamrongnawasawat, for this reason, the authorities decided to close the beach of Maya Bay.

“If you live in the country, 22% of GDP, which is income from tourism, you will understand how difficult such decisions. Many people never thought that such a decision can ever be taken”, — said the expert.

The beach Maya Bay opens again, the Thai authorities will impose a restriction: the beach will be able to visit no more than 2,000 tourists a day. Also the boats will not be allowed to cross the stretch of shallow water with coral reefs. Next year the beach will be closed again for four months.

The head of the national Park Worapoj Limlim says that is not how the Park staff will be able to control the number of tourists and a ban on sailing boats near coral reef. According to him, may have to strengthen work in this area patrol.

Tourists will always be a little of the Cinque Terre — five small, colorful villages on man-made terraces on the coast of the Gulf of Genoa. This area that is home to 5,000 people, became a national Park in 1999. Now Cinque Terre is visited by over 2 million tourists a year.

Tourists come here to stroll along the scenic trails that link together the five settlements located on the terraces of the vineyards. But over the years these trails have become unusable — due to erosion and crowds of tourists.

Popular route between the villages Riomaggiore and Manarola is closed from September 2012, and is expected to reopen no earlier than 2021. The main part of the trail was closed after the landslide and then the injuries to members of the Australian travel group.