Norwegian scientists have discovered “dark” area on the ice sheet in Greenland, which formed a layer of dust and soot. In the area of rapidly melting ice that affects the rising sea level and creating a likelihood of extensive flooding of coastal areas worldwide. This writes the online edition of Science Alert. 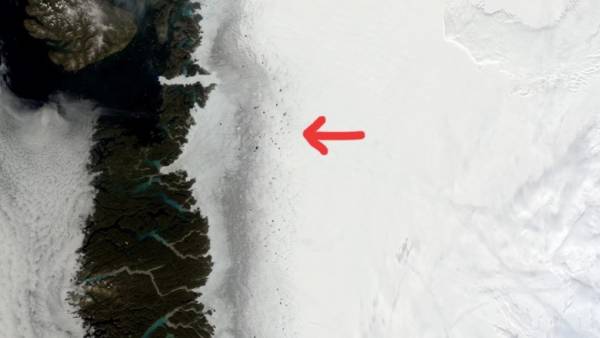 “Dark” is about 400 miles long, its maximum width is 100 kilometers. On its territory grow dark algae that feed on carbon particles, and give the ice a distinctive shade. The result is a reduced albedo — the ability of a surface to reflect the sun’s rays. Instead, the ice absorbs the energy and begins to melt quickly.

Liquid water, in turn, promotes the growth of algae. Even a small warming leads to an explosion in their numbers, eventually increasing the area of the “dark zone”. Because of this, there is a reverse effect of the positive relationship, which further enhances melting.

Scientists have found that the largest contribution to the decline of the ice making soot from forest fires and other combustion processes. It is responsible for 73% of variability of albedo.