Why buses with students again and again continue to get into an accident.

Accidents involving school buses and private owners engaged in transportation of groups of children, with enviable regularity appear in police Chronicles. The consideration of the law, which prohibits to use of obsolete vehicles, was postponed for the fifth time.

In Yakutia 6 APR car with students was involved in an accident. After the accident, in the surgical Department of Nyurbinskaya Central district hospital was delivered six children. According to the Republican Department of the Investigative Committee of Russia, which checks on the fact of road accident, the boys went on a private UAZ 220695-04 to the event in a nearby town. A group of 10 students accompanied by a teacher. The accident occurred when the van had almost reached the destination: “UAZ” has faced with going in the opposite direction of the car Toyota Land Cruiser. Investigators along with the Prosecutor’s office, in addition to the circumstances of the accident, check the observance of rules of transportation of minors, including the actions of the school.

This news from Yakutia coming all the time. In March 2017 injured seven children, who were traveling to the competition in volleyball. The driver lost control, causing the car fell into a ditch. It was later revealed that the carrier first, not informed the traffic police about the transportation of children, and secondly, didn’t check the technical condition of the car before the trip, and the third, released on the flight untested driver. Three months earlier in a car accident in the far Eastern Republic came another owner-driver carrying a group of teenagers for a conference in the city of Olekminsk. There were no serious consequences: the pupils of the boarding school has got off with bruises and grazes, and accompanying teacher broke his hand. 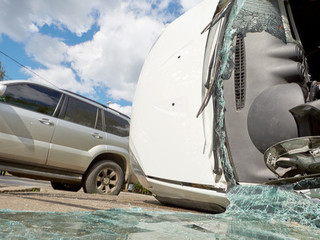 of the traffic police told how the Russians make overtaking

In criminal news come up regularly and accidents with official school buses. In October 2017 on the highway Syktyvkar-Cheboksary school bus crashed into a truck, killing three people — the driver and two children accompanying adults. A year and a half ago two school buses collided on a highway in the Sverdlovsk region, after the accident, four children were hospitalized. The cause of the accident, according to prosecutors, was poor the cleaning of the roads. Administrative proceedings brought on the head of the village administration Spasskoe where the accident occurred, and is responsible for the condition of the roads “Uraldorstroy”.

In a situation with the school buses easier to look guilty, at least from a legal point of view. With private companies is complex, and not only in the case of the search for those responsible. In the night of Monday, April 9, had an accident on the road Vologda-New Ladoga Acura, in which there were five teenagers. Among them was the son of the driver who drove the band home from a competition in Sambo, a way had to be done from Pskov to Arkhangelsk the city of Velsk. At night, the car collided first with “MAZ”, then Scania truck, then drove into a ditch. The victims received injuries of moderate severity.

In social networks a fierce debate about who is right and who is wrong. Some say about the bad state of the roads, the other — about the irresponsibility of the coach and parents of adolescents, and others — about the reasons that push them to engage in self-carriage of children: “For those who asked about the “normality” of such trips on competitions, the thought of parents and so on. The train ride from the city to Pskov — is at least 30 hours with a stopover in Moscow. Not less than 3 thousand rubles per person per one-way tickets. Plus you need something to eat (2.5 days plus 1 day for competition)”.

Total cost of this trip is obtained not less than 7.5 thousand rubles per person. Vel’sk is not Peter. There are very many just can’t afford it.Of dispute in social networksWhile the thunder will not burst

The trip to the competition for the participants of children’s sports team acrobatics school sports reserve Sibiryak ended tragically. In December 2016, the bus in which were the kids and the coaches, got in an accident on the highway Tyumen-Khanty-Mansiysk: he crashed the tractor with a loaded trailer, the bus behind him washed up on the oncoming lane, where it collided with a truck. Killed 10 teenagers and two adults, almost two dozen people received severe injuries. The court found guilty in the case about the accident three people: the Director of sports school Irina Tarasova, a representative of the owner-carrier Alexander Sidoruk and truck driver rail Saidenova — the last two have received real terms of imprisonment.

The head of the RCDS Alexander Bastrykin, remembering the consequences of a major accident a year later, offered again to require traffic police to escort the buses with children, even if we are not talking about the column of vehicles. An initiative he addressed to the head of the interior Ministry, however, until she remained motionless. Tomsk traffic police Department, for example, to control the transportation of the children volunteered to create a special center, which will monitor the implementation of school transport.

Sounded and proposals to toughen penalties for the illegal transport of children and committed in their implementation violations. For example: Yakut taxi driver, whose car caught fire during a trip with students, a violation will cost you a fine in the amount of 4 thousand rubles.