Medvedev: Russia reserves right to respond to US sanctions

GORKI, April 9. /TASS/. Prime Minister Dmitry Medvedev at a meeting with Deputy Prime Minister called the new anti-Russian sanctions of the US protectionism, which is unacceptable and illegitimate. 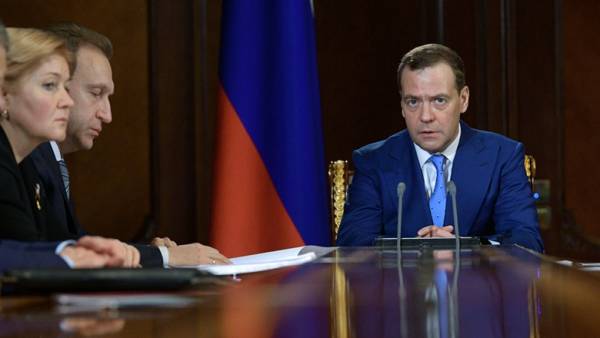 “Friday’s sanctions against our country is of course another manifestation of the protectionist policy but also veiled in that the cover of the sanctions,” — said the Prime Minister at the meeting with Deputy Prime Ministers. He is sure that “These decisions, of course, unacceptable and we consider them illegitimate, because they are located outside the plane of international law.”

Medvedev recalled that “last Friday, the U.S. Treasury announced new restrictions on 24 of our citizens and 14 Russian companies.” “As in previous sanctions actions that we see in this obvious, simple, pragmatic goal — to solve uncompetitive ways their economic problems”, — said the head of the Cabinet. According to him, “there is political cover, and all these arguments about some poor Russian, which must be punished, must not overshadow economic substance”. “The economic essence is to promote American commercial interests around the world contrary to the trading rules, contrary to the established order”, — said the Prime Minister.

In fact, it is a hindrance to the normal activities of Russian companies, which operate successfully in global markets and are in this sense competing with American business.Dmitry Medvedev, Prime Minister of the Russian Federation

The Russian head of government also reminded that Donald trump was still a candidate for President of the United States, “actively advocating that America conducted a protectionist policy”. “Actually we are now witnessing, not only in relation to Russia. Against a number of States introduced new duties, it applies to the European Union — on steel, on aluminum products, including — and with China in General brewing video trade war”, — said Medvedev.

Medvedev said that Russia reserves the right to respond to new US sanctions. “Of course, we reserve the right to retaliatory action, including existing trade agreements and procedures,” — said the Prime Minister.