The defense Ministry told about the upcoming Victory Parade

Moscow. April 6. INTERFAX.RU IN the may 9 Victory day Parade will involve more than 120 units of military equipment and weapons, including the latest designs, said chief of Land forces, Colonel-General Oleg Salyukov in an interview with “Krasnaya Zvezda”. 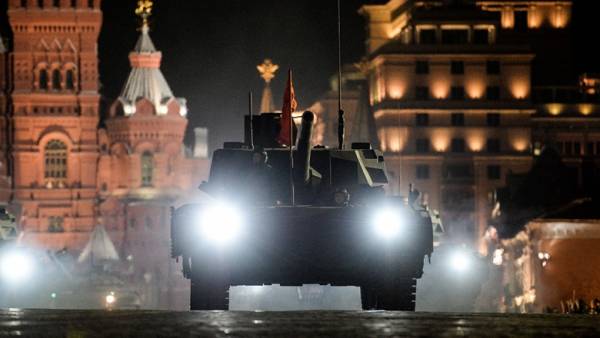 “This year at the Victory parade, we expect several new products. First and foremost is the support combat vehicle tanks BMPT “Terminator”, air defense missile systems (anti-aircraft missiles — if) “ТорМ2” protected vehicles “Tayfun” with the wheel formula 4×4,” said Salyukov, who on may 9 will command the military parade on red square.

“In the mechanized calculation of Regardie that participates in the military parade for the first time, included special ВПК233136 armored vehicle “Tiger” armored vehicle “Урал432009” hull and armored car “Patrul”” he said.

“Of course — said Salyukov, — the greatest interest of spectators who will be watching the May 9 parade on red square will cause promising examples of new technology: tanks “Armata”, BMP “kurganets” and BTR “boomerang”, self-propelled howitzers “Koaliciis” Arctic variant anti-aircraft missile complex “ТорМ2ДТ”.

He said that from March 28 began a joint training parade and mechanized columns on the front site in the suburban Alabino.

The parade will be attended by 73 aircraft and helicopter — by the number of “winning” years, said Salyukov.

For flights of aircraft in the parade will include eight airfields in the Moscow, Tver, Bryansk, Saratov, Kaluga, Voronezh, Lipetsk and Nizhny Novgorod regions, said Salyukov.

Part 33 of the main calculations from the column will include 12.5 million people — officers, sergeants and soldiers of military units, students and cadets of military schools, students of Suvorov military and Nakhimov naval schools of the Ministry of defense and representatives of other law enforcement agencies. “In addition, for the second consecutive year in the military parade on red square will take part front calculation of the all-Russian youth military-Patriotic public movement “Uname”,” — said Salyukov.

Also on the main square of the country will parade a battalion of soldiers are female (more than 400) from the Military University of the defense Ministry (Moscow), Military Academy of telecommunications named after Marshal Budenny of Russia (Saint-Petersburg), the Military Academy of logistics behalf of the army General khruleva (Moscow) and Voennokosmicheskie Academy named after Mozhaisky (St. Petersburg).