UN Secretary-General antónio Guterres, at the Conference on disarmament in Geneva urged the United States and Russia further reduce their nuclear arsenals. However, the heads of the delegations of both countries have made it clear: neither Moscow nor Washington in the foreseeable future do not intend to continue to disarm. The Minister of foreign Affairs of the Russian Federation Sergey Lavrov has named a number of reasons why Russia is not ready to heed the call of the General Secretary. Among them the preservation of American tactical nuclear weapons in Europe and the US deployment of a global missile defense system. U.S. Ambassador Robert wood, in turn, said that further disarmament is impossible, because his country was threatened by power-rivals and rogue States. In this situation, the prospects for new initiatives to reduce nuclear weapons arsenals, which promised soon to present antónio Guterres, look dubious. 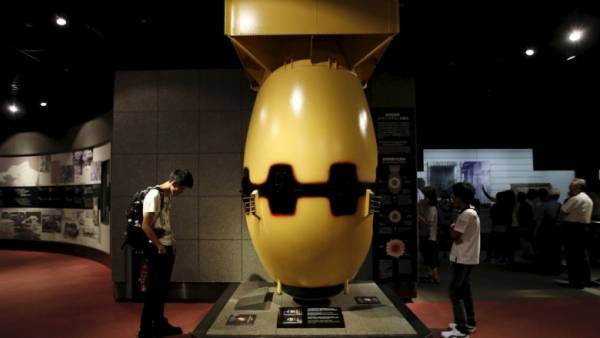 Opening the conference, UN Secretary-General antónio Guterres welcomed the achievement of U.S.-Russian indicators in the framework of the Treaty on measures for the further reduction and limitation of strategic offensive arms (SNV-3). Recall that both countries to February 5, as provided by the contract, resulted in their nuclear arsenals in accordance with the limits of agreement: up to 700 Intercontinental ballistic missiles, ballistic missiles on submarines and heavy bombers, 800 deployed and non-deployed launchers, and 1,550 warheads on deployed carriers.

At the same time, UN Secretary-General urged both countries not to stop there but to continue the disarmament process for “global peace”.

According to him, the world remains 15 thousand units of nuclear weapons. The owners of the greater part of this Arsenal are Russia and the United States.

“The destructive effect on strategic stability”

Sergei Lavrov, who headed the Russian delegation in Geneva, in his speech said that Russia has reduced its nuclear Arsenal “more than 85%” compared with the peak of the cold war.

However, to further disarmament, Moscow, as evident from his speech, are not ready. And there are a number of reasons.

In particular, the authorities of the Russian Federation have claims to the United States under the contract start-3. Moscow doubts the accuracy of the data provided by the Americans, believing that we are not talking about real reductions, and the conversion of part of the launchers of the sea Trident II missiles and heavy bombers-52N so that there is return potential.

In addition, Moscow, according to Sergey Lavrov, is worried about “significant change in the approaches of the United States in the context of their updated nuclear strategy, which includes raising the role of nuclear weapons, including through the creation and deployment of so-called low-yield warheads, which leads to lowering the threshold of use of nuclear weapons”. Recall, recently released a new nuclear posture Review (Nuclear Posture Review) the United States should be that Washington is ready to invest in new weapons systems, including low-yield nuclear warhead for sea-launched ballistic missiles D5 Trident. According to the authors the strategy is intended “to discourage Russia’s illusions” that she may first apply a “limited” nuclear attack on Europe.

“In those missions with a gross violation of the NPT non-nuclear NATO members are participating in planning the use of American non-strategic nuclear weapons and are involved in the development of appropriate skills, — said the Russian foreign Minister.— All should be clear: thus the US military are preparing armed forces of European countries to use tactical nuclear weapons against the Russian Federation”.

The Russian side, according to the Minister, considers it impossible to disarm without taking into account a number of other factors, “which have a destructive effect on strategic stability and international security.” Namely, the deployment of American global missile defense, the development of the USA high-precision strategic offensive arms in non-nuclear equipment, the non-ratification (including Americans) of the Treaty on the comprehensive prohibition of nuclear tests and the prospect of the withdrawal of strike weapons in space.

Finally, Russia is convinced that in the next round of disarmament, if it comes to it, needs to involve other nuclear-weapon States (at least three official: China, Britain and France).

“The superpowers and rogue States undermine the world order,”

About the US attitude to disarmament is evidenced by the fact that the conference in Geneva no one from Washington has not arrived. The country was presented by the American permanent representative at the organization by Robert wood (Conference on disarmament — a permanent UN Agency with an annual high-level meetings).

Recall that the last nuclear posture Review re-erects a nuclear weapon in an integral — in fact, a key element in the system of ensuring national security of the United States (as adopted by the predecessor of Donald trump Barack Obama doctrine sought to reduce the role of nuclear components). In his speech in Geneva, the Robert wood almost quoted verbatim chunks out of the review. According to him, unlike their US rivals “strongly engaged in modernizing their nuclear forces.”

They built up their arsenals and even developed and adopted a new system. The world situation today is more complex and dangerous than ever since the end of the cold war. Superpowers and rogue States undermine the world order. They violate the border and increasingly threaten the U.S. and our allies.Robert Goodposted United States in the Conference on disarmament

Noting that in such conditions in the foreseeable future to talk about measures to further disarmament “unrealistic,” Robert wood also recalled that his country had already eliminated 85% was available to it during the cold war nuclear weapons.

Despite the apparent cooling of the two largest nuclear powers to disarmament theme of the UN Secretary General in his speech announced that he soon will unveil a new initiative aimed at the prevention of nuclear war. Its key component should be to further reduce the nuclear arsenals of the leading countries.

The prospects of this initiative is questionable, however, not only because of the position of Russia and the USA. At the United Nations in recent years, overall not very good to work with this theme. A vivid example is the work of the conference in Geneva. Sergei Lavrov on Wednesday said that “the forum stalled”. You could call it an understatement: the past 20 years fails to agree upon the agenda of that organization. Established in 1979, the Conference on disarmament only twice, in 1998 and 2009, coordinated their own programs, but they are subsequently not implemented due to disagreements among participants.

Finally, on 18 February this year there was a breakthrough: 65 participants agreed to divide the conference into five parts and to reach agreement on each of them separately. Among them, nuclear disarmament, prevention of nuclear war, prevention of an arms race in space, “negative security assurances” (the development of agreements that guarantee the non-use of nuclear weapons against non-nuclear States), as well as a unit dedicated to new types of weapons.

“For Russia, the new format may be an opportunity to restart the discussion of Russian-Chinese draft Treaty on preventing the deployment of weapons in outer space, — explained “Kommersant” expert of the PIR Center Andrey baklitskiy.— The Russian offer of 2016, a Convention for the suppression of acts of chemical and biological terrorism was not included in the agenda of any new subsidiary bodies, although can be discussed among other questions in the fifth, while the auxiliary body”. Thus, according to the interlocutor, “b”, even that is fairly limited forward movement caused the concern of several countries participating in the “lose control”, so the decision to keep the new format will be accepted by results of its work at the beginning of 2019.

Expert of the Association for arms control (Washington, DC) Alicia Sanders-Establishment in conversation with “Kommersant” called inspiring by the fact that the conference for the first time in 20 years failed to agree on concrete actions. “At the same time, I doubt that the creation of new committees will remove the paralysis, which is an organization for so many years”, — she said and added that Russia could out of the conference to achieve success in preventing the use of chemical weapons, ceasing “to defend the regime (of Syrian President Bashar.— “B”) Assad.” Sergei Lavrov on Wednesday reiterated that “the United States and its allies cynically used the allegations about the use by Damascus of chemical agents as a tool of the anti-Syrian geopolitical engineering”.

While the proponents of further disarmament failed last year to achieve significant success outside of the conference. At the UN in new York signed a Treaty banning nuclear weapons. The document, however, is more of a symbolic value, because it has not присоединилfсь none of the nuclear countries. With the most rigid criticism of the agreement made by Russia and the United States. In this regard, they have no differences.