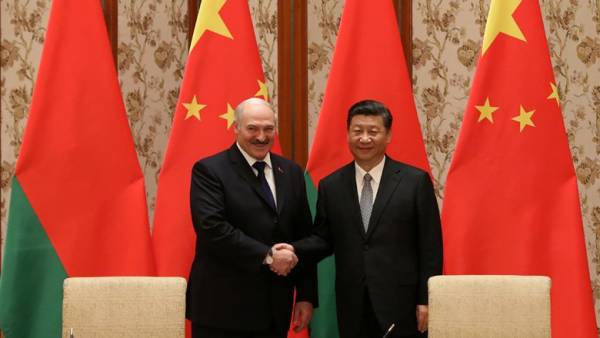 Foreign policy of the Belarusian leadership is increasingly moving away from the Russian vector. In a previous article we wrote about how Lukashenka establishes the relationship with the United States. A new and unexplored direction of Belarusian politics, in contrast to the cooperation with China that Minsk is developing for a long time. Together with the Chinese comrades Lukashenko is building missile complexes, industrial parks and exploring natural resources of Belarus. How far gone is the Belarusian-Chinese relations, to understand”.ru”.

“I, on behalf of the Belarusian people bow down to, my friend, the President of China, and all those military who have helped us during one and a half years to create on the territory of Belarus production of high-precision weapons,” — crumbled Alexander Lukashenko thanked at the Chinese partners, noting in March of 2018, the centenary of the armed forces of the Republic.

Its as always an apt and figurative expression, “the world plunged into the maelstrom of high — precision weapons, missiles that fly in the window”. Previously, Belarus was not of such technologies, however, came to the aid of the Chinese comrades. Despite the declared Union with Russia, from about the mid-2000s, he was looking for an alternative.

Just then the West imposed against the Belarusian regime sanctions, and the official Minsk turned his eyes to the East.

Back in 2006, at a meeting with the then defense Minister Cao Gangchuan Lukashenka characterized relations with China as “strategic”. This characteristic is then looked more as a wish than as a reality of the situation. But as the years passed, and “the main ally of Russia” really began to develop a strategic relationship with China.

In 2012, Lukashenka turned to Moscow with a request to give him operational-tactical missile complexes “Iskander”. The Belarusian President as a response to “the activation of certain forces” needed in the complex, capable of carrying missiles with nuclear warheads.

However, Russia was ready to deploy in Belarus “Iskander” only with his military.

Moscow rightly feared that if the sending missile system directly Belarus, a powerful weapon (or component thereof) can be a “respected Western partners” of NATO.

Not getting the desired, Lukashenka began to look for an alternative to the Russian “Iskander”. To create a missile system from scratch is extremely difficult, and so poor a country as Belarus, is almost impossible. Therefore Minsk has decided to develop its own operational-tactical complex valued with Eastern partners.

A new weapon has created pretty quickly, and in 2015, the Victory Day of the Belarusian military for the first time demonstrated built jointly with China reactive system of volley fire (MLRS) “Polonaise”. It was officially stated that the 300-millimeter guided rocket hit 280 kilometers. Not “Iskander” is, of course, with its 500 kilometers, but the power is impressive. However, it is not clear the purposes for which Belarus needs such a weapon.

But to say that the Chinese helped the Belarusians to create a “Polonaise”, it would not be entirely correct. In fact, the Chinese themselves, and it created because of the rocket A200 and much of the electronics is Chinese, not Belarusian origin. The main contribution of Belarus was to supply under the missile launcher chassis, first produced by Minsk wheel tractor plant 30 years ago.

The Belarusian leadership, however, boasted a high level of localization of production. According to the then head of the Belarusian state military-industrial Committee of major-General Oleg Dvigala, as many as 95 percent. However, as reported by sources in 2018, four years after the first demonstration of “Polonaise”, the factory never started to complete the production cycle. The real extent of localization, according to them, is about 30 percent, which makes the Belarusian defense industry is highly dependent on cooperation with the Chinese.

Not a rockets uniform

The share of China in trade relations is also higher than in Belarus. Over the past five years, the total turnover of goods of military and dual-use technologies between the two countries has more than doubled, while the share of China accounts for up to 65 percent of such products.