Putin twice made the remark Minnikhanov during the visit to Tatarstan

During his recent visit to Tatarstan President Vladimir Putin twice made the remark to the head of the Republic Rustam Minnikhanov. During a meeting on the project “Housing and the urban environment” the President has paid attention that mister Minnikhanov was distracted. 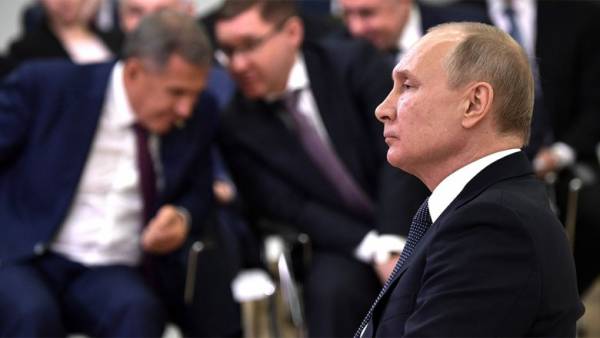 “Rustam Nurgalievich! Rustam Nurgalievich! Do not get distracted, you. Don’t listen to us”, — said Vladimir Putin to the head of Tatarstan, noting that will not put him in an awkward position, because he had not heard the beginning of the issue, and continued discussion of problems of the deceived shareholders.

Later during meeting of Presidium of the state Council Vladimir Putin gave to Rustam Minnikhanov word as the head of the working group, however, did not find his sight. “Picked up and left somewhere. Where did he go?” asked the President of Russia.

In a press-service of the head of Tatarstan “RIA Novosti” reported that Rustam Minnikhanov with Presidium meeting of the state Council did not go anywhere, the moment went to the microphone that was on the side.

We will remind, in Kazan Vladimir Putin also visited the Centre of culture and sports “Moscow” and met with the team “KAMAZ-master”.