MPs has developed amendments legalizing the hunt in cages. 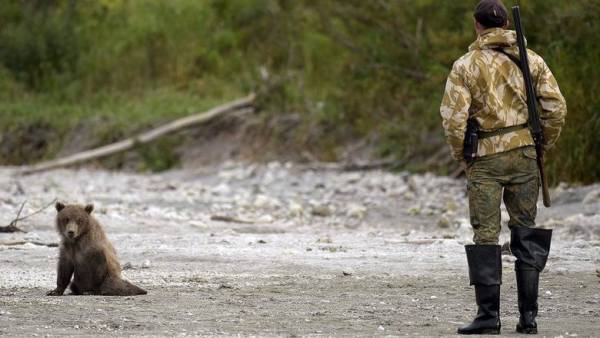 As it became known””, in the near future in the Duma will be amended to allow not only breed and keep animals in semi-free conditions, but to kill them. The mining entrepreneur will be able to choose your own. Experts point out that in the case of the amendments, the hunters will be able to use prohibited types of hunting, e.g. bow or crossbow, which are also animal rights activists. According to the authors of the bill, hunting in enclosures will help to reduce harm to wildlife.

The authors of the draft amendments to the law “On hunting” (“b”) became the first Deputy Chairman of Committee on ecology and environment protection Nikolai Valuev and a member of the Committee on natural resources Maxim schablykin.

According to interlocutors of “Kommersant” in the state Duma, the bill is planned to make in the near future.

Against captive hunting for a long time are the animal rights activists. “If the initiative passes, then in the near future anyone will be able for fun to shoot at animals in cages and unable to escape, — activists write on social networks.— This is pure sadism and zhivoderstvo”. A petition on the website change.org against the legalization of captive hunting was signed by about 200 thousand people.

Now keeping and breeding in semi-free conditions is only allowed to increase their numbers and subsequent release into the environment, points out the expert of “Greenpeace Russia” Mikhail Kreindlin. Thus, according to him, in case of acceptance of amendments it will be possible to use silenced weapons, whose use is now prohibited: “a Request to archery and crossbow is very big among hunters, so maybe they want this bill to legalize”.

On this account also fears the head of “animal advocates Alliance” Yuri Koretsky: “It is a perversion in many forms: you can not just kill animals in enclosures, but to do it with new, previously prohibited devices.” Also, in his opinion, the bill as drafted allows for the possibility of contact pritravki, prohibition act which was passed last year. “If the ways chosen by the hunter, they can go to these places and incite the animals the dogs,” said animal rights activist.

One of the authors of the bill Nikolai Valuev does not agree with the claims of animal rights activists: “the Methods of production and possible weapons for this purpose is defined as rules about hunting law “On weapons”. It will be impossible to come up with something, what aren’t they”. According to him, the possibility of breeding and production animals in cages will actually reduce harm to wildlife:

In fact, these animals are no longer wild because not withdrawn from nature, as a rule, and is output as an agricultural animal. They are complete property of the owner who does this. The experience of many foreign countries shows that by breeding in a captive environment, also achieved an increase in the number of animals.News

We will remind, in November of 2018 animal rights activists spread in social networks document, which, according to them, is a preliminary version of the amendments to the Federal law “About hunting”. The document allows legal entities and individual entrepreneurs engaged in hunting in enclosures located on the territory of hunting grounds on the basis of permits for keeping and breeding of hunting resources in semi-free conditions and artificially created habitat. After the outrage of animal rights activists Nikolay Nikolaev stated that the document is merely “one of many proposals made to the Committee,” and “active work on the preparation of the bill for first reading on this topic, the Committee is not”. However, in January 2019 during the meeting of the working group of the Committee on natural resources, it was decided to prepare amendments to legalize captive hunting, during the month.

“As soon as the bill goes — it will be discussed and considered”, — said “Kommersant” the head of the Duma Committee on natural resources Nikolay Nikolaev. In his words, to define the concept of captive hunting legislation is still necessary:

Now such hunting is conducted, and until we clearly define this concept, will continue the abuse. However, just the norm to not enter — it is necessary to specify what size the enclosure should be that it was not a cell of two by two meters, and the area in the hundreds of thousands of hectares.