WASHINGTON, 6 Feb — RIA Novosti. The US President Donald trump once again stated that the cause of the US withdrawal from the Treaty on the elimination of intermediate and shorter-range missiles (INF Treaty) was “repeated violations on the part of Russia,” but did not rule out the possibility of developing other agreements on arms control, which would include China. 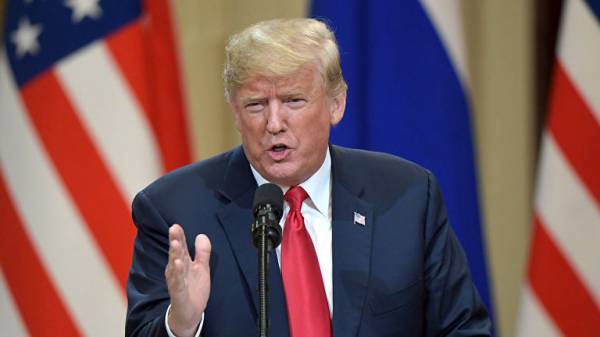 “Under my administration we will never apologize for advancing the interests of America. For example, decades ago the United States concluded a Treaty with Russia under which we agreed to limit and reduce our missile capabilities. While we fully comply with the agreement, Russia has repeatedly violated its conditions,” said trump, speaking with his annual address to the U.S. Congress on the situation in the country.

According to him, so he announced that the United States officially out of the INF Treaty. While trump did not rule out the possibility of concluding other agreements on arms control.

We may be able to negotiate a different agreement, connecting China and other countries, and we may not be able to. In this case, we will considerably surpass and outstrip all others.Donald Trepresent USA

Trump announced last Friday that Washington February 2, starts the procedure of withdrawal from the INF Treaty. Secretary of state Mike Pompeo said that “if Russia does not return to full and verifiable compliance with the Treaty within the six-month period”, then the contract will be terminated. The NATO allies supported the US decision, considering that Washington did so in response to the alleged “significant risks to Euro-Atlantic security” from cruise missiles of the Russian Federation.

Russian President Vladimir Putin on 2 February said that Russia mirror response to the US decision to withdraw from the INF Treaty and also suspends participation in the Treaty. The head of state noted that Russia should not and will not be involved in costly for the Moscow arms race. Meanwhile, Putin added that all the proposals of the Russian Federation on disarmament “remain on the table and the doors are open”, but required to continue to initiate no negotiations on this issue.