Moscow. 6 Feb. INTERFAX.RU Six persons rescued from under the rubble of a house collapsed in the district of Kartal in the Asian side of Istanbul, reports on Wednesday, the Daily Sabah. 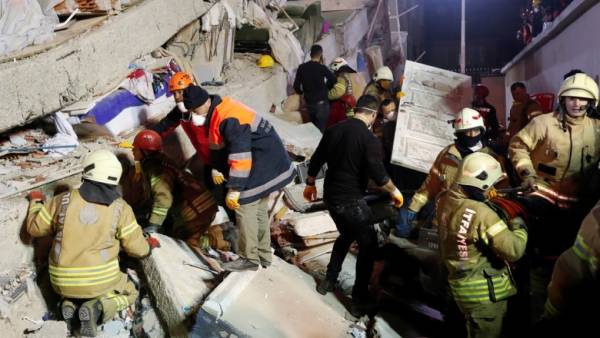 According to the latest edition, two people were killed. The search for victims continues. On a scene there arrived the speaker of the national Assembly of Turkey Binali Yildirim and the Minister of internal Affairs of Turkey Suleyman Soylu.

UPDATE — 3 people rescued from the rubble of the 8-story building that collapsed in Istanbul”s Kartal district; search and rescue teams continue to look for those still trapped under debris https://t.co/Y1crGswKSC pic.twitter.com/UJ0xvQ9Crz

Earlier it was reported that the building had 14 apartments, according to preliminary data, they lived from 27 to 30 people. In the collapse was easily wounded several passers-by.

BREAKING: A Six story apartment building collapses in the Maltepe district of Istanbul’s Asian part of the city.
Major rescue operation underway for people trapped under the rubble. pic.twitter.com/Zz5njugnlp

The police said that there was no explosion before the collapse was not; according to the preliminary version, the building collapsed from old age.