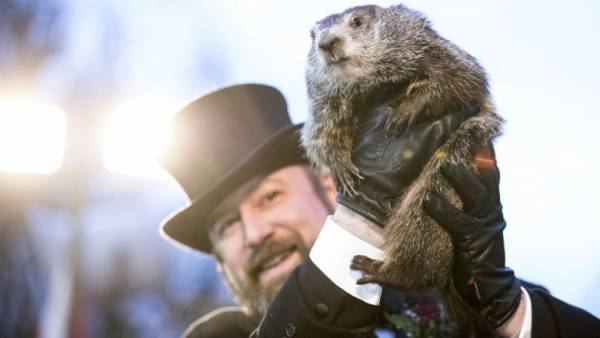 Groundhog pulled out of the hole on the hill, Gobbler-Nob. According to local legend, if the animal is frightened of his own shadow and hides in a burrow, it means winter will last for another 1.5 month. If the weather is cloudy and Phil does not see his shadow, then it is expected the early arrival of spring.

As reported the representative of “marmot Club”, in the traditional events of Groundhog Day in a town of about 25 thousand tourists, reports TASS.

Groundhog day is a traditional holiday in the United States and Canada, is celebrated on February 2.

After the release of the movie “Groundhog Day” (1993) it was celebrated in some other countries.

I think this accurately represents how many people feel on #GroundhogDay2019 (although “they say” it’ll be 60 degrees Fahrenheit on Tuesday, it’s 11 degrees outside right now…I have lost my faith in warm weather) pic.twitter.com/TXXZI6tREj

Earlier it was reported that marmots Archie and Nagini living in the Moscow zoo will not go out nor 2 Feb as will be in hibernation until about the middle of March.

I’m a rodent, not a meteorologist

Overslept this day and marmots from the Leningrad zoo. In a press-service of the institution recalled that last year, they awoke only at the beginning of April, writes “the Newspaper.ru”.