Researchers at NASA have described the events taking place just a hundred kilometers from the event horizon of a black hole. On an astronomical scale this close to the event horizon: the sphere that escapes not even light. 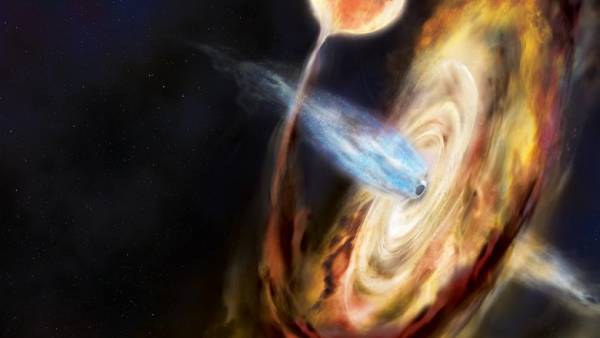 To get detailed information about what is happening around the event horizon enabled x-ray radiation. Black hole MAXI J1820+070 (or just J1820) surrounded by a disk of rotating and shrinking hot substances and the crown: a cloud of particles with very high, of the order of a billion degrees temperature. With such a strong heating of the substance glows already not visible light, and x-ray radiation, and this radiation can be detected by specially designed space telescopes.

Using installed on Board the ISS detector is NICER (Neutron star Interior Composition Explorer), astronomers not only caught x-rays from J1820, but were able to identify and analyze their components. Emitted by the surroundings of the black hole radiation was the glow of the crown itself, the illumination of the crown, reflected the accretion disk and photons that are first absorbed by the plasma in the disk, and then was again emitted with a small energy loss.

Observations were conducted several weeks after the outbreak occurred, as scientists believe, due to the instability of the accretion disk. During this time, the emission spectrum changed markedly, putting on compression of the crown of a black hole. It is, according to the estimates of astrophysicists has become ten times smaller: about 16 kilometers against the original 160.

The best the huge black hole devouring our galaxy

For astronomy this is a very small distance — in the message of NASA provides this analogy: to learn something the size of 160 kilometers to the distance that separates us from the object MAXI J1820+070, it is still considered that with the Land berry located on the orbit of Pluto.

None of the existing and even design tools are not able to achieve such high angular resolution, in this case, however, astronomers have not received detailed pictures, and worked with observations in the x-ray spectrum.