Trade tariffs and the Iranian nuclear deal continues to cause controversy in Berlin and Washington. 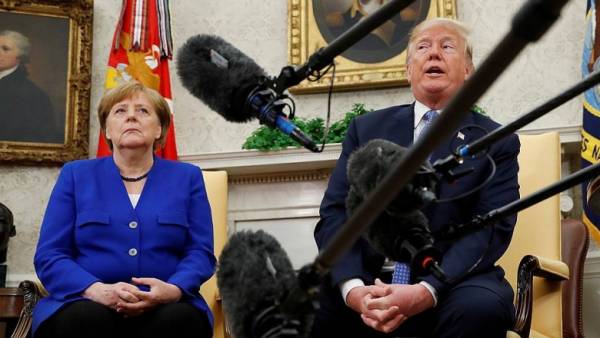 The President of the United States Donald trump and German Chancellor Angela Merkel tried but failed to hide their differences. This is the leitmotif of Western media reporting on last Friday’s meeting. Basic tension between Washington and Berlin were trade relations between the US and EU nuclear deal with Iran. In addition, the sides discussed Russia’s role in the Syrian conflict and the situation in Ukraine, as well as side effects which may take sanctions against Moscow.

The meeting of U.S. President Donald trump and the Chancellor of Germany Angela Merkel took place on Friday. This is the second European American President talks with European leaders. This week in Washington on a state visit the President of France Emmanuel macron.

“Trump and Merkel met eye to eye, but never looked each other in the eye,” — under this title left The New York Times.

Restraint in the statements and behavior of two high-ranking politicians contrasted sharply with the visit to Washington of the President of France Emmanuel Makron.

Donald trump has complained about unfairness in trade relations and a trade deficit of U.S. trade with the EU in the amount of $151 billion, exemption from tariffs on steel and aluminum was Tuesday, if the United States would not extend.

Angela Merkel made it clear that the question of fees there is no progress and “the decision rests with the President.”

March 23, the US entered into force the new tariffs on steel and aluminium products — 25% for steel and 10% aluminum. They apply to all countries, which supply it in the US, however, deferred until may 1 got Argentina, Australia, Brazil, Canada, Mexico, the Republic of Korea and the countries of the European Union.

For his part, Donald trump stated that “I intend to work with Chancellor Merkel on lowering barriers to exports from the United States to rectify these trade imbalances and deepening of our economic relations”.

As for the future of the Iranian nuclear deal, to the revision which is sought by the US, Angela Merkel called it an imperfect but necessary “puzzle piece” over which toiled Germany and foreign partners. “Let’s see what will the US do”, she said. Donald trump is not made during a press conference with Angela Merkel no hints about his plans — will cease or not, the U.S. may 12, his participation in the Joint comprehensive plan of action (SVPD). The US President once again reiterated that “the Iranian regime is fueling the violence that sheds the blood across the region” and everywhere where there are problems, “there’s always Iran.”

Earlier during his visit to Washington, the President of France Emmanuel macron also stated that Paris does not intend to withdraw from the AGREEMENT. He acknowledged that “this agreement does not answer all concerns”, but again the caveat: “We should not discard it with nothing more substantial in return.” As for the possibility of revising the agreement, then Mr. macron believes is possible.