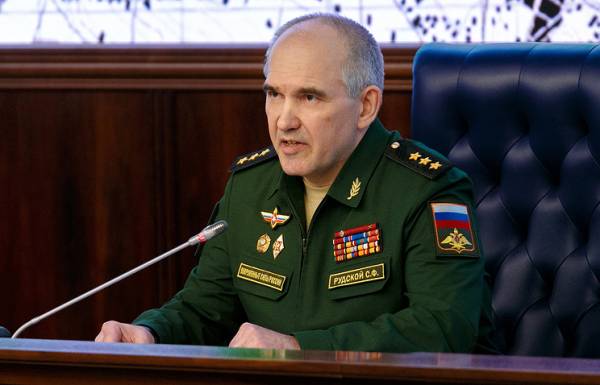 MOSCOW, April 25. /TASS/. On objects in Syria, which hit the United States and its allies, no weapons, was taken from that sample confirmed it, said Wednesday at a briefing head of the main operations Directorate of the General staff of armed forces Colonel-General Sergey rudskoy.

“The first object is a scientific research center “Burza” on the outskirts of Damascus In 2017 in the specified laboratories of the research center of the Organization for the prohibition of chemical weapons inspections, their results confirmed the absence of any activities related to the development and manufacturing of toxic substances, the Second object is the underground storage, “Chem Shiner” in HOMS province, chemical weapons at the facility were never developed and are not stored Third – ground storage “Chem Chinchar” in the province of HOMS, and in this store poisons also never contained”, said rudskoy.

“In addition, to determine the level of possible contamination caused the missile strike and the threat to the civilian population by Russian specialists of radiation, chemical and biological protection on the “Barsa” was taken all the necessary samples. Their analysis did not reveal the presence of toxic chemicals and toxic substances on the destroyed object, which is confirmed by the relevant act,” said the General.