The breath of the planet

Volcanic activity — as the breath of the planet. As long as the earth lives, it breathes, and is the breath shifts the tectonic plates that causes volcanic eruptions, geysers, thermal springs, exit and the emergence of mud pots.

Underground warm, restless volcanoes of Europe, the geyser, which gave its name to the others in his family, fumaroles, and how soap can cause the geyser to erupt in the photo story “the Attic”. 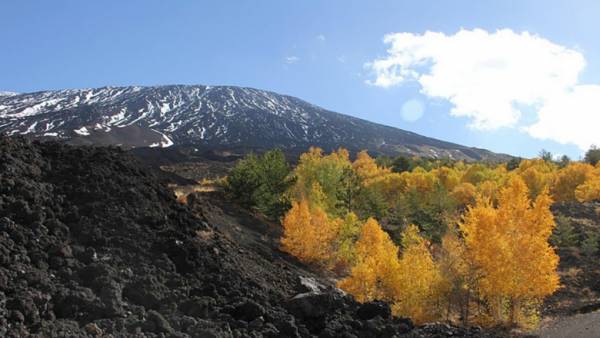 Etna (Sicily, Italy), under the slope of which is conveniently located one of the largest in Sicily, Catania, the largest and highest volcano in Europe and one of the most active on the planet. Eruptions occur and on top of it, and on the slopes.

Just a hundred years ago, on the summit of Etna there was only one crater — Central. But now there is four. It Voragine (ital. “the abyss”) and Bocca Nuova (Italian: “new mouth”) formed respectively in 1945 and 1968 inside the Central crater. Two is North-East crater is the highest point of the mountain, 3330 m, appeared in 1911, and the youngest and, as is characteristic of the young, the most active is the South — Eastern crater, “born” in 1971.

Volcanologists there are several types of eruptions. For example, volcanic type, named in honor of O. Vulcano, is a short, strong, but relatively small explosions with a yield of viscous magma and the release into the air of material that can reach the speed of 350 meters per second. At strombolianskom type (from the island of Stromboli) volcano has been erupting continuously for several months or years, throwing a large quantity of liquid lava, bombs, and pieces of hot slag. If the eruption is characterized by a large volume of very liquid lava coming out of the crevices, it is a Hawaiian type of eruption. And the most powerful plinian eruptions belong to the type: powerful and sudden explosions with the release of viscous lava and the pillar of gas and dust, the height of which can reach 50 km.

Etna combined several types. The eruption of this volcano may be accompanied by explosions, lava flows, gas emissions, ash, pieces of slag and other material.

Etna belongs to the stratovolcanoes. This cone-shaped mountain that can be represented in the form of a layer cake: instead of test — a layer of lava, instead of cream — ash and debris, which are formed by another eruption. So the volcano grows layer by layer. The mouth of the bottom connects with the magma chamber, and the top is crowned with a crater.

Fumaroles — the hot volcanic gas and steam. They are different, for example the composition of the sulphur of the Solfatara, or carbon — safety. And they are not only seen, but sometimes heard. Coming out of the hole gas can hiss, whistle, or even to escape from the ground with a rumble. This little fumarole in the pictures above do not even hissed, and softly snoring.

Volcanic gas at 50-85% of water vapor. More than 10 per cent carbon dioxide, about 5% sulfur dioxide, 2-5% of hydrogen chloride and 0.02 to 0.05% of hydrogen fluoride. Hydrogen sulfide and gaseous sulfur are typically present in small quantities. Sometimes there are hydrogen, methane and carbon dioxide, and a small admixture of various metals.

This files most often on the proximity of fumaroles can be judged by the smell — strong smell of rotten eggs of hydrogen sulphide, which is included in the composition of the gas. Putting off of the surface, the sulfur makes the soil around a bright yellow color.

In 122 BC, an explosive eruption of Etna, during which the fallen ash and lapilli — tiny pieces of porous lava — crashed through the roof of many buildings in Catania. But its population of 10 years was exempted from paying taxes!

Etna is located at the junction of the African and Eurasian tectonic plates. And the first moves towards the Eurasian, plunging into her. Eruptions of Etna are connected with what is going down, the plate melts and raises the Eurasian plate.

During eruptions is the release of gas, ash and other materials from a tiny lapilli to volcanic bombs, sticky lumps of lava. And from mixing lava with sand and ash may be porous volcanic tuff. Its color can be any of: black, brown, brown, red, orange, yellow, pink or even purple and bluish-white.

Ash clouds from the eruption of mount Etna are especially dangerous for aircraft. Getting into the engine, particles of ash can melt and cover the moving parts with a layer of glass, which can lead to engine failure. These clouds are often visible from space, and repairing serious problems for the airlines with flights to Catania, which is only a few tens of kilometers from the volcano.

Volcanic soils, or andosol formed due to the eruption of volcanoes and quite fertile: they are rich in nitrogen, phosphorus and sulfur. At the same time contained in them, easily weathered volcanic glass.

The Greek island of Milos, where in the early XIX century, was found a statue of Venus (and, in fact, because called Milo), is the South Aegean volcanic arc. The island was formed by the eruption of several volcanoes, it is an active stratovolcano and numerous fumaroles. Milos and meet near the geothermal springs, whose temperature reaches 300 degrees.

Thermal water is groundwater with a temperature of 20 °C or more. They are often found in areas of active volcanism. The depth of the thermal underground waters depends on the climate zone: in the area of development of permafrost, it is 1500-2000 m, in the subtropics — up to 100 m and in the tropics, these waters often come to the surface.

“Tatopani” Nepali means “hot water”. In poor mountain villages such sources significantly make people’s lives easier: and the dishes they are easier to wash, and wash, and by wash.

Crater lake Kerid is in the South of Iceland, the Western volcanic zone. The crater is about 3 thousand years, and by volcanic standards, it is quite young, and thus managed to maintain almost perfect form.

On the origin Kerida there is no single version. According to one of them, Kerid was once a cinder cone — small volcano with a conical shape, but had used up my entire hearth of the volcano and sank under its own weight in the cavity.

Iceland from South to North crosses the Mid-Atlantic ridge. This is the boundary of the diverging North American and Eurasian tectonic plates in the North Atlantic and the African and South American in the South. In part, this explains the high volcanic activity on the island. “Fire mountains” in Iceland there are more than hundreds. This crater rows, and thyroid, stratovolcanoes, mud, underwater and beyond.

The geysers (Lis. geysa “to gush”, “rush”) is a hot springs that occur where there is volcanic activity. The inhabitants of the island was lucky: in Iceland the geysers a lot, but in the world they occur quite rarely. This is mainly due to natural causes, because the geysers is almost “living on a volcano”: in these places, earthquakes are frequent, go mudflows and avalanches, which resulted in the geysers falls asleep or they lose their power source. This often happens on the Kamchatka Peninsula in the legendary Valley of geysers. In 2007 there was a landslide, and in 2014 came selle. Both events greatly changed the mode of operation of many geysers.

Haukadalur valley in the South of Iceland — the real heart of the Klondike. The geyser Strokkur erupts every five or ten minutes, but the column of water and steam does not rise above 20 meters. And a few dozen meters away is the Geysir, whose name is, in fact, became a household name.

Geysir active for about 10 thousand years, although during this time he had UPS and downs. In 1845 he was thrown to 170 meters, and just a year later, only 54. In the late nineteenth century Geysir podnakopiv forces and released a column of water and steam at 60 meters several times a day, and in 1916 was almost asleep. 20 years later around him through a layer of quartz dug a channel through which the groundwater level fell and the geyser became more active. As soon as the channel was clogged with quartz, the eruption continued. In the 1990-ies geyser is artificially stimulated to erupt with the help of soap (as do, I will tell later). But it has a bad effect on the environment, so this method pretty quickly stopped using. But after the earthquake in 2000 Geysir was revived two days in a row was spewing a column of water and steam to a height of 122 meters. The last time he woke up in February 2016, and is now considered to be almost asleep.

The geyser erupts because the water in the underground voids is heated by volcanic heat, turns to steam and steam pressure lifts the water up. However, it appeared that the geyser can be forced to erupt, even when he wasn’t going to. Just add (a lot) of soap.

Surfactants (including Soaps and detergents) have surface-active properties, i.e., lower the surface tension. Water molecules disperse easier, and the liquid turns to steam, which breaks up and carries away water.

This method is to artificially force the geyser to work opened in New Zealand in 1901 by pure chance. At this time on the North island in the town of Aim-O-Tapu was arranged “an open prison” — a sort of settlement for criminals considered dangerous to society. But among other things, Aim-O-Tapu is an area with high geothermal activity. Settled there the prisoners were agriculture and, of course, began to wash the clothes in these hot springs. One of these days one of them after washing poured a fairly concentrated solution of soap, he slipped through the cracks in the rock and started the reaction in the underground tank from which water burst forth.