Found one of the darkest planets in the Universe

Found outside the Solar system gas giant was one of the darkest planets known to mankind. It turned out that discovered in 2014, a celestial body absorbs 99% of light. 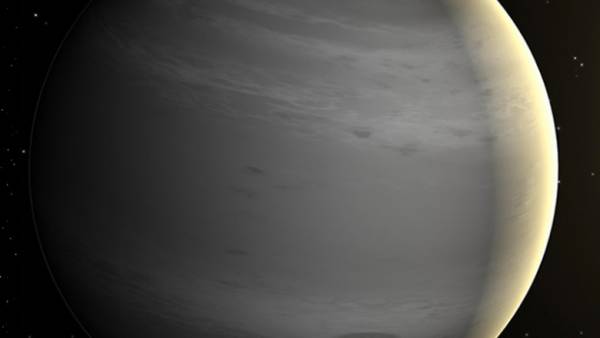 It is reported by Science Alert, citing the magazine New Scientist. A Preprint of the article describing the study can be read on arXiv.org.

The planet WASP-104b belongs to the class of so-called hot Jupiters — these planets have a mass close to the mass of Jupiter, but located 100 times closer to its star than Jupiter is to the Sun. Hot Jupiters are composed mainly of gases but unlike gas giants, which very well reflect visible light, these planets are usually quite dark (most hot Jupiters reflects only about 40% of the light). Discovered planet absorbs 99% of light and enters into the five of the darkest known planet.

of the ISS, NASA and the astronauts. The 7 best Instagram accounts about space

WASP-104b is in a yellow dwarf system in the constellation Leo at a distance of about 466 light-years from Earth. From the hot Jupiter, the star of this system is only 4.3 million miles, the planet manages to make a complete revolution around its orbit in less than two earth days. Scientists believe that such proximity of WASP-104b to the star and explains why the planet is so dark.

Hot Jupiter rotates synchronously with the rotation of the star around its axis, so it always turned to one side (like the Moon always faces the Earth on one side). It turns out that on one side of the planet all the time day and night on the other. Due to the very small distances to stars (and therefore high temperatures) on the “day side” do not have time to form clouds, which usually reflect a lot of light. The atmosphere on this side is probably made up of atoms of sodium and potassium, which absorb light in the visible range. Into night and the colder the cloud side are formed, but it misses the light, so this side is simply nothing to reflect.