Adviser to trump called the conditions of improving relations with Russia

Advisor to the President for homeland security John Bolton met with Russian Ambassador to the U.S. Anatoly Antonov. The high-level meeting took place a few days after the attacks, the US and its allies on Syria. 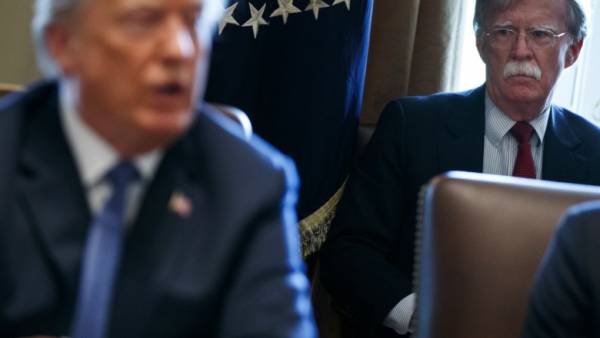 “At their first meeting in the present as they discussed the state of relations between the United States and Russia. Councillor Bolton said that more good relations in the interests of both the USA and Russia”, — quotes the message of the White house, RIA “Novosti”.

According to Bolton, to improve relations will need to discuss disturbing topics, such as “interference” of Russia in the American elections in 2016, the alleged use of chemical weapons in the UK and the situation in Ukraine and Syria.

Assistant to the President for national security refers to supporters of tough line against Moscow. Referred to as the “hawk of hawks”.

Bolton, who served in the administration of George W. Bush the posts of Deputy Secretary of state for arms control and later Ambassador to the UN, is one of the few members of the Bush team, who agreed to work in the team of Donald trump. At first, he was an active supporter of the Republican candidate, Jeb Bush.

Bolton close to the ultra-conservative wing of the Republican party and has maintained a good relationship with Stephen Bannon, for some time held the post of adviser to trump (referred to as the ideologist of “tempismo”).

It should be noted that the appointment of Bolton to the important post of national security Advisor happened for a couple of months before the Congress must make a decision on the nuclear deal with Iran.