The Federal Bureau of Yabloko on Friday to discuss regional issues, including the conflicts in Saint-Petersburg and Moscow branches of the party. In St. Petersburg the situation has worsened: the Deputy of legislative Assembly, former Chairman regional “the Apple” Michael Amosov spoke with harsh criticism of the founder of the party Grigory Yavlinsky, accusing him of authoritarianism and refusing to support him. 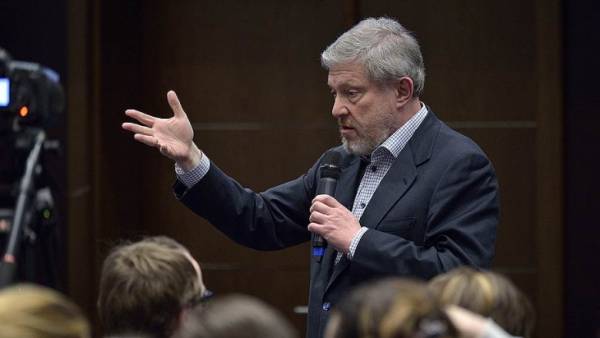 The Deputy of legislative Assembly of Petersburg from the “Apple” Michael Amosov called a press conference to Express mistrust to Grigory Yavlinsky. “Those who today controls the “Apple” — first of all, Grigory Yavlinsky, the Holy believe that they know better in Moscow, how to work the party in the regions, — he said.— It is impossible to offer to develop the state power on the principles of federalism and the private party to build authoritarianism. Will not work: people won’t believe such politicians.”

To leave the “Apple” the Deputy does not intend to, although admits that it will be expelled from the party for criticism. “I had talks with Dmitry Gudkov (ex-Deputy of the state Duma, which, together with Ksenia Sobchak led the party “Civil initiative”.— “Kommersant”). We need to think about broad democratic coalition. Unfortunately, Grigory Yavlinsky during the last years been an obstacle to its creation,” said Mr. Amos.