Media: Syria’s army broke a part of aviation in Hamim because of the threat of US air strike

Syrian government troops in preparation for possible air strikes, the United States transferred part of aircraft in the Russian air base Hamim, according to the French newspaper Le Figaro, citing sources. 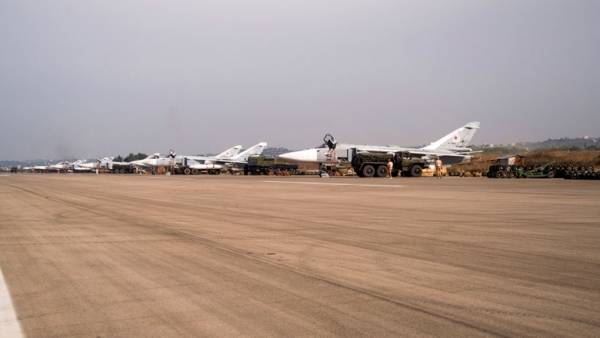 According to them, were also evacuated to the headquarters of the Syrian army and a military base in the town of Dumayr, where based aircraft, causing strikes on Eastern ghouta. According to the publication, “apparently, the air strikes the United States and France will spare the Russian base in Tartus and Mamimi”.

Le Figaro also reports that in the last days intensified cooperation between Russia, Iran and Syria. According to the newspaper, currently in Syria is Iranian General Qasem Soleimani, commander of elite division “al-Kuds”. The publication says that today in Syria there are about 2 thousand Iranian military advisers. As the newspaper suggests, “in addition to the control of the Iranian population, the presence of Qasem Soleimani may indicate preparation of the response to the attacks of Western countries (for Syria.— “Kommersant”)”.

We will remind, according to information associated with the Syrian opposition organization “White helmets”, April 7, in the Syrian city of Duma was carried out a chemical attack. Her victims, presumably, began to 70 people. The Russian foreign Ministry called the statement “a stuffing” and the experts of the Russian defense Ministry has not found evidence of the use of chemical weapons.

However, the President of the United States Donald trump promised to give a decisive response to the possible chemical attack. Tonight is the deadline given to them promises. Britain, meanwhile, refused to join a possible U.S. strike, demanding more evidence that Kimathi is the regime of President Bashar al-Assad.