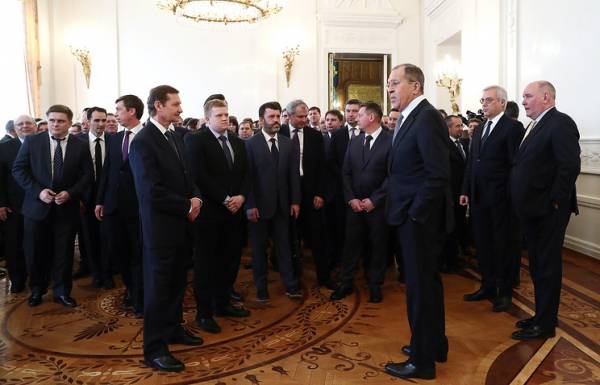 MOSCOW, April 9. /TASS/. Russian diplomats expelled from Western countries after the incident in Salisbury, came on Monday in a historic mansion of the Russian foreign Ministry on Spiridonovka in Moscow for a meeting with the Minister of foreign Affairs Sergey Lavrov. The head of the Russian foreign Ministry welcomed them home and promised that soon they will be able to return to work. Ahead of the meeting, the diplomats told journalists stories sudden departure and impressions back home.

Speculation around the return of the diplomats

The meeting of Lavrov with the expelled diplomats said at a briefing on Wednesday the official representative of Russian foreign Ministry Maria Zakharova. She noted that around the return of Russian dipuchrezhdeny in the press there appeared much speculation, especially after the foreign Ministry invited journalists to cover their arrival in Russia. Those journalists who managed to see the departure of diplomats from the Vnukovo-2 airport after arrival, I noted that the window taking out their bus was curtained, so that it was impossible to see, even individuals arrived. Besides, in the expulsion of the Russians a number of Western countries as the reason pointed out their activities incompatible with the status of diplomat.

“For obvious reasons we are not engaged in the organization of shooting them out. People were given only a few days to come, – said Zakharov. – Among these people a huge number of families and children. We do not believe that shooting children, and the people themselves in extraordinary circumstances correct. Therefore, no organizational part in the lighting plan was not.”

Meeting in the foreign Ministry do to assuage doubts about the work of the expelled diplomats. They moved freely through the mansion and talked with reporters, including at the camera. Persons no one was hiding. Many were told the same history of anti-Russian measures waited, but the timing of the exit was very tight. However, the Embassy was able to organise the process well and orderly. Many expressed regret at the fact that the trip ended prematurely, however, added that sad is not much, because there are new countries and challenges.