The Ministry of defence of Russia has published aerial photographs, confirming the destruction of neighborhoods in raqqa in the bombing of the international coalition headed by the USA. 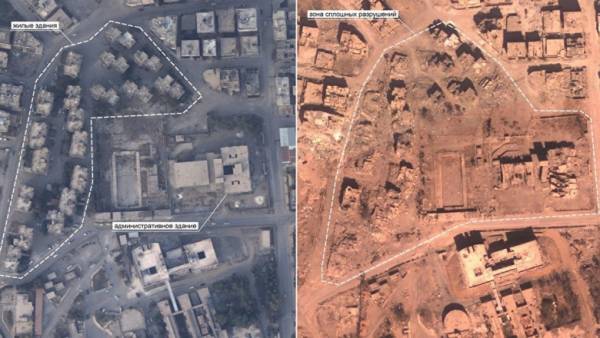 According to the Agency, the city destroyed most of the residential buildings, hospitals, mosques, schools and vital infrastructure. It is noted, in raqqa, the humanitarian situation remains very difficult, access charity missions to it is difficult.

The Ministry of defence announced that those who returned to the city often die as a result of explosions on explosive remnants of war. From October 2017 to March 2018, more than 650 people were injured as a result of bombings, 130 people were killed. Every week fixed 25-30 such cases.

Previously, the Agency reported that thousands of bodies of civilians and fighters who died during the bombing of the US-led coalition remain under the rubble in the Syrian city of raqqa. The defense Ministry said that in the area of recorded outbreaks, which can result in an epidemic.

According to the defense Ministry of the Russian Federation, a coalition of States prevent the arrival in Raqqa any representatives of humanitarian organizations and the UN mission. Together with the United Kingdom States has ignored a UN security Council resolution on Syria, which should fix the scale of the humanitarian disaster to determine the volume of emergency assistance to the remaining population.

On 24 February the UN security Council unanimously approved a resolution establishing a 30-day cease-fire in Syria for humanitarian operations and assistance to victims. The draft resolution 2401, was nominated by Kuwait and Sweden.