Moscow. 5 APR. INTERFAX.RU. The Russian Admiral not agree with the conclusions of foreign experts, which included a heavy cruiser “Admiral Kuznetsov” in the five of the worst carriers in history. 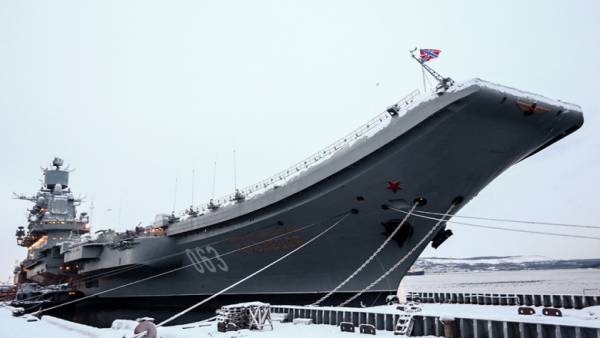 “Many other countries and this aircraft carrier is not” — said to “Interfax” on Thursday a former chief of the General staff of the Russian Navy Admiral Viktor Kravchenko. According to him, “Admiral Kuznetsov” is really inferior to American carriers, but at the same time it’s a ship that is capable of fulfilling combat tasks.

So Kravchenko commented on the conclusions of the authors of publication the National Interest, which he called the Russian “Admiral Kuznetsov” aircraft carrier is the worst.

If we talk about the “Admiral Kuznetsov” as a whole, and by modern standards this is quite a powerful ship. It can effectively perform a range of tasks. He has attack weapons, anti-submarine, anti-air. The repair will take place and everything will be fine.Victor Kravchenko

“If you think the standards of the United States, which more than ten carriers, and several of them nuclear, in a modern database, then compare with them do not. Our air wing is not very big — only 50 aircraft, and the Americans — to one hundred,” said the Admiral.

“The”Admiral Kuznetsov” for many years. At the same time, when he took part in operations in Syria, he showed that he can bring enough benefits”, — said Kravchenko.

About The “Admiral Kuznetsov”

“Admiral Kuznetsov” in February last year returned to Severomorsk from the Mediterranean sea. Deck aviation cruiser was involved in a military operation in Syria. According to the official, “Admiral Kuznetsov” was lost during a hike two carrier-based fighter. The accident occurred during the landing approach, the pilots ejected.

“Admiral Kuznetsov” was laid on the slipway black sea shipyard in 1982. The ship can carry nearly 50 aircraft. As part of its weapons — anti-ship cruise missiles “Granit” anti-aircraft missile and missile-gun complexes “Blade” and “Chestnut”, automatic naval artillery installation, and the system of antisubmarine defense.

It is expected that the only Russian aircraft carrier “Admiral Kuznetsov” in the near future will go to repair.