KYIV, April 6. /TASS/. Captain detained in Ukraine, the Russian seiner “Nord” Vladimir Gorbenko according to the decision of Kherson city court remanded in custody for two months, with the possibility of bail. About it the correspondent of TASS said the representative of the Russian Consulate in Ukraine. 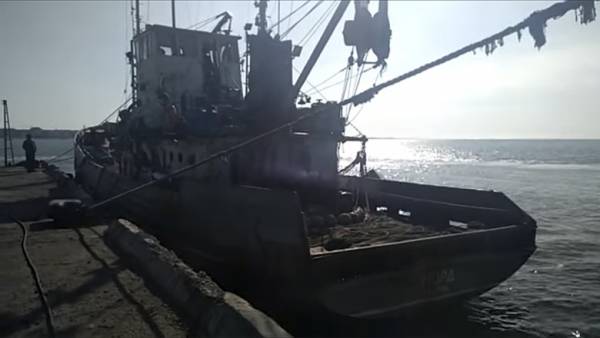 “Detention for two months with the possibility of bail”, — he announced the court’s decision.

The representative of Consulate General of Russia in Odessa. announced that the protection of the captain intends to appeal the decision of the Kherson city court for his arrest for 60 days.

“We (the diplomats — approx. TASS) discussed with lawyers the situation around the decision of the court. The lawyers said they will appeal,” — he said and added that “the Deposit will be made today.”

As explained to the correspondent of TASS reported the press Secretary of the so-called Prosecutor’s office of Crimea (part of the structure of the Prosecutor General of Ukraine) Tatyana Tihonchik, detention will continue until may 31, 2018 with the possibility of bail 35240 hryvnia” (about $1355).

The ship’s captain is accused of “violating the procedure of entry in the temporarily occupied territory of Ukraine and departure from it with the purpose of causing harm to the interests of the state”, punishable by deprivation of liberty for a term up to five years and confiscation of the vehicle.

At the same time in Mariupol, Primorsky district court considering a charge of an administrative offense against the other members of the crew of the vessel, which, if found guilty, will only be fined.