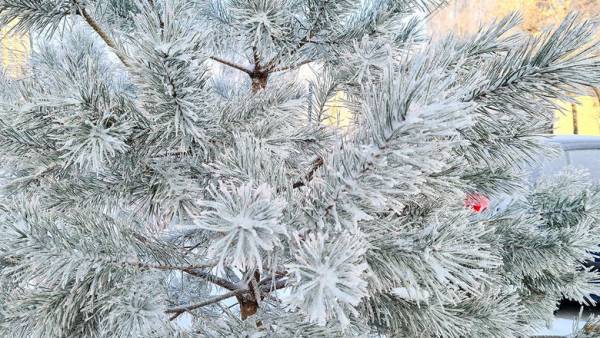 Snow is not white

The grains of frozen water are transparent. Snowflakes seem white because their edges reflect visible white light. Sometimes, looking at a snowflake under a magnifying glass, you can see that it shines with rainbow colors. This is sunlight refracted by passing through ice.

Hydrogen and oxygen molecules, which make up water and, accordingly, snowflakes, can only be combined in such a way that a hexagonal ice crystal is obtained.

Since fresh compacted snow consists of about 90-95% air, it is an excellent insulator. For this reason, many animals burrow deep into the snow in winter to hibernate. For the same reason, some northern peoples built and still build houses and shelters out of snow.

Snow should be classified as a mineral

Snowflakes and ice are natural solids, so they formally belong to the category of minerals.

Freshly fallen snow absorbs sound waves, giving everything a muted, calm atmosphere after a storm. But if the snow melts and freezes again in the form of an ice crust, it can reflect sound waves, causing the sound to spread further and clearer.

Water freezes at a temperature of zero degrees Celsius. But snow often falls at plus temperature, when the thermometer can be plus 3 or even plus 6 degrees. This happens if it rains long enough. It cools the air around it and eventually creates a suitable environment for the formation of snow flakes.

There is colored snow

Coal dust, pollution and even freshwater cryophilic algae can turn snow black, orange, brown or blue. Pink or “watermelon snow” appears due to algae containing astaxanthin, a carotenoid that gives color to shrimp and salmon.

There is a fear of snow

People and animals may suffer from a fear of snow. In humans, such an obsessive fear is called chionophobia. This disorder is most often associated with childhood trauma, and sometimes with an irrational fear of being trapped in a snow trap. Animals and plants that are not adapted to life in conditions of deep snow cover are called chionophobes.

The shape of the snowflake depends on the temperature

Air temperature is one of the decisive factors for the shape of a snowflake. For example, at a temperature of about minus 2 degrees Celsius, thin needle-like ice crystals form. At minus 5 degrees, the crystals will be very flat and lamellar. The modern international classification of forms of ice crystals in the atmosphere, adopted in 1949, identifies more than 40 main types of snowflakes.