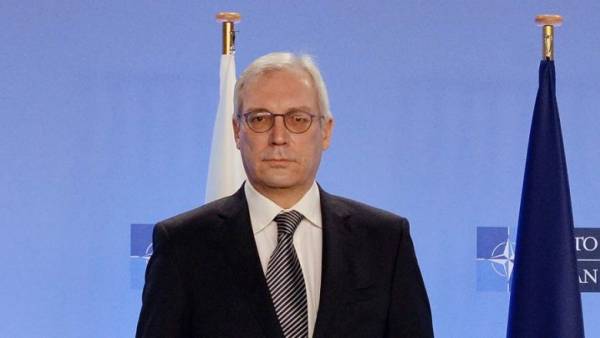 “ We will take all necessary measures to fend off these threats by military means, if it doesn’t & nbsp; turn out to be political & raquo;, & nbsp; & mdash; promised Grushko. He added that & nbsp; & nbsp; & nbsp; & nbsp; this situation cannot be brought and & nbsp; need to move forward in & nbsp; the directions that we & nbsp; set out. & Quot ;.

Grushko also said that the policy of the North Atlantic Alliance is to try to contain Russia.

“ In & nbsp; the cornerstone of NATO policy is the task of containing Russia, huge resources are allocated for this. & lt; & hellip; & gt; This interferes with the negotiation process & raquo;, & nbsp; & mdash; noted & nbsp; he.

Grushko explained that “ if NATO switches to a & nbsp; policy of containment, it means that a counter-containment policy will be pursued from the & nbsp; side of Moscow. ''

According to the results of the talks, the Ministry of Defense said that & nbsp; ignoring Russia's position on the & nbsp; side of NATO is fraught with the emergence of new conflicts and & nbsp; incidents, leading to & nbsp; undermining the security architecture in & nbsp; Europe. As the press service of the military department reported, Deputy Defense Minister Colonel-General Alexander Fomin told the representatives of the alliance about this at & nbsp; negotiations in Brussels.

“ The Russian side has repeatedly offered the alliance to take measures to & nbsp; de-escalate the situation. On the & nbsp; side of the alliance, Russian initiatives were ignored. This creates the prerequisites for & nbsp; incidents and & nbsp; conflicts, undermines the foundations of security & raquo;, & nbsp; & mdash; The press service of the Ministry of Defense quoted Fomin as saying at the & nbsp; negotiations.