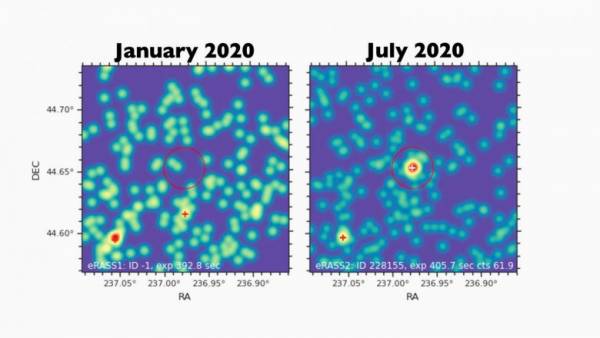 The corresponding article was published in the Astrophysical Journal.

In 2018, astronomers discovered the supernova AT2018cow – the letters COW were generated by a computer, but because of the similarity with the English word “cow”, they became a stable designation for this type of supernova. This type was distinguished by an unusual brightness in the visible spectrum: about ten times brighter than any other known supernova, but at the same time it faded more quickly. In addition, AT2018cow was a source of powerful, rapidly changing X-rays, which led astronomers to assume that they witnessed the birth of a black hole or neutron star.

Scientists have explained the formation of huge cyclones on Jupiter

A new supernova, AT2020mrf, was discovered in July 2020 by Yuhan Yao from California Institute of Technology and her colleagues. They did this with the help of the Russian-German telescope “Spektr-RG”. The researchers verified this data using the Mount Palomar Observatory’s ZTF optical instrument — and the supernova detection was confirmed.

Then, a year later, the same object was observed using NASA’s Chandra X-ray Observatory. “When we saw the Chandra data, we couldn’t believe our eyes,” says Yao. “I rechecked the data several times, and it really is the brightest Cow—type supernova in X—rays.”

Scientists believe that such powerful X-ray radiation arises from a kind of “engine” inside the remnants of a supernova – an active black hole or a rapidly rotating neutron star, a magnetar. It is not yet known why the Cow-type supernova “engine” is so active, but most likely it is a special type of supernova progenitor star.