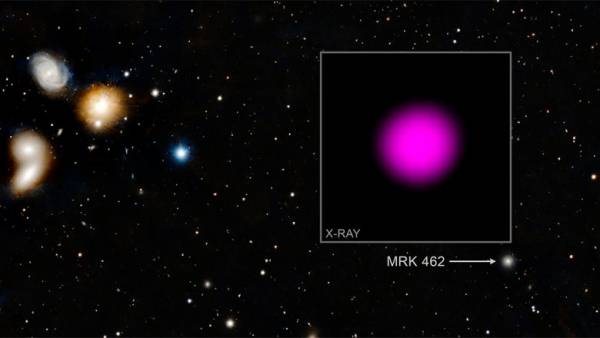 Astronomers using NASA’s Chandra X-ray observatory have discovered a supermassive black hole in the constellation of Hounds inside the dwarf galaxy Mrk 462, which is located about 110 million light-years from Earth.

The found black hole has a mass of about 200 thousand solar masses, which makes it one of the smallest supermassive black holes.

Scientists note that the new discovery is one of the first cases of the discovery of a deep-lying supermassive black hole in a dwarf galaxy.

Usually such finds are impossible due to the insufficient capabilities of modern telescopes.

To find signs of black hole growth, the researchers used the Chandra Observatory to observe eight dwarf galaxies that had previously shown hints of black hole activity. Of these eight, only MRK 462 showed the X-ray signature of a growing black hole. Moreover, the ratio of high-energy and low-energy X-rays from MRK 462, as well as comparison with data at other wavelengths, indicate that the black hole inside this dwarf galaxy is heavily hidden by gas, which made its detection even more impressive.

Scientists believe this discovery will help them understand how some of the earliest black holes in the universe form and grow. So far, there is no generally accepted theory of the formation of supermassive black holes in the scientific world. Now scientists are more inclined to gradually increase the mass of these formations.

If astronomers discover that most of the dwarf galaxies contain supermassive black holes similar to the one in the galaxy MRK 462, it will reinforce the idea that the embryos of the black holes of the earliest generation of stars grew amazingly fast, forming giant objects in the early Universe, whose mass is millions and billions of times greater than the solar mass.