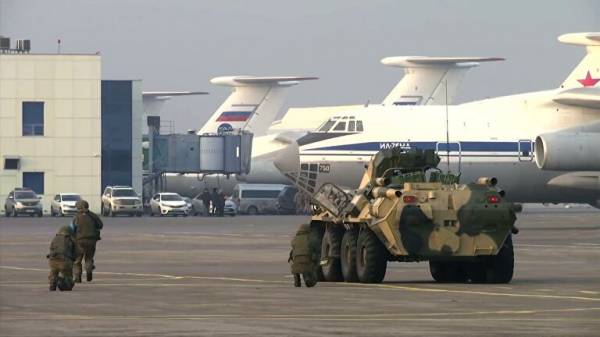 “CSTO forces will not be involved in all regions. They will locally provide security for vital facilities. This is a reasonable measure. We & nbsp; faced with & nbsp; a carefully planned and & nbsp; surprise attack by a whole army of radicals simultaneously in & nbsp; different regions of the country & raquo;, & nbsp; & mdash; Karin wrote in & nbsp; his Telegram channel.

He recalled that “the CSTO mission is exclusively peacekeeping and is designed for a short period of time.”

“ After the stabilization of the situation, the entire united peacekeeping contingent of the CSTO will be withdrawn from & nbsp; our country '', & nbsp; & mdash; added by the Secretary of State of Kazakhstan.

Mass protests in & nbsp; Kazakhstan began in & nbsp; the first days of 2022 & nbsp; & mdash; residents of the cities of Zhanaozen and & nbsp; Aktau in the & nbsp; west of the country opposed a two-fold increase in prices for & nbsp; liquefied gas. Later, protests spread to & nbsp; other cities, including & nbsp; including & nbsp; Alma-Ata, the old capital and & nbsp; the largest city of the republic: looting began there, militants attacked & nbsp; state institutions, took away weapons. In the & nbsp; response, the authorities imposed a state of emergency throughout the country until & nbsp; 19 & nbsp; January and & nbsp; began a counter-terrorist operation. According to the & nbsp; UN data, about & nbsp; 1 thousand people were injured during the protests in & nbsp; Kazakhstan. According to the & nbsp; updated data of the Ministry of Internal Affairs of the republic, 16 security officials were killed.

On the morning of January 5 & nbsp; President of Kazakhstan Kassym-Zhomart Tokayev dismissed the government and & nbsp; headed the Security Council. At the & nbsp; first meeting of the Security Council under his leadership, Tokayev characterized the situation in & nbsp; Kazakhstan as undermining the integrity of the state and & nbsp; said that & nbsp; asked for & nbsp; CSTO help & nbsp; in & nbsp; overcoming the terrorist threat. The CSTO Collective Security Council decided to send collective peacekeeping forces to & nbsp; Kazakhstan to normalize the situation in & nbsp; the country. On January 7 & nbsp; Tokayev said that & nbsp; terrorists, including & nbsp; including those who arrived from abroad & nbsp; continue to resist, and & nbsp; promised to destroy those who & nbsp; did not & nbsp; lay down their arms. In addition, the President noted that & nbsp; all the demands of citizens, expressed in & nbsp; peaceful forms, were heard.