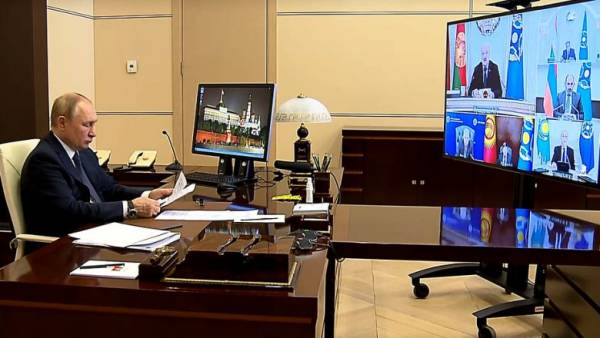 Kazakhstan has experienced the most severe crisis in the entire history of its independence.

The riots that emerged after the protests have been preparing for a long time. They were attended by terrorists, & nbsp; including foreign ones.

The main attack of the terrorists was directed against Almaty, the fall of the city would open the way to & nbsp; capture the south, and & nbsp; then the whole country.

The exact number of civilian casualties is being specified.

Constitutional order in the country has been restored.

The situation in & nbsp; Kazakhstan & laquo ; concerns all of us. ''

We need to talk about & nbsp; Tajikistan, which needs support, including military equipment, so that later it will not & nbsp; come out like in & nbsp; Kazakhstan.

& laquo ; Lessons, about & nbsp; of which much has been said, should be learned, first of all, in & nbsp; Uzbekistan.

There are over 6 thousand militants on & nbsp; borders of the CSTO. Islamic State '' (a terrorist organization banned in & nbsp; RF).

The situation on the & nbsp; Tajik-Afghan border is complicated every day, it is necessary to create a security belt around Afghanistan.