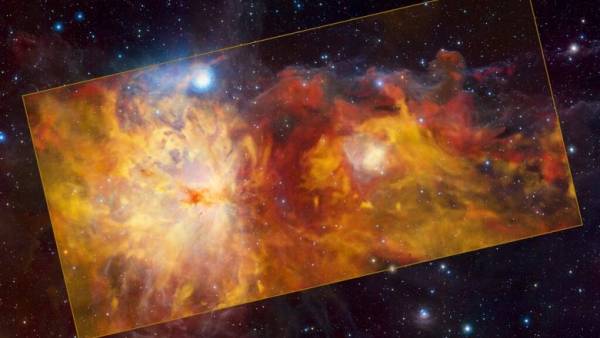 The colorful Flame nebula in the constellation Orion fully justifies its name in new photographs taken at the European Southern Observatory (ESO).

In previous images of other telescopes, NGC 2024 looks more like a multicolored veil. But in the photo of the APEX telescope installed in the Chilean Atacama desert, the Flame nebula is photographed in the radio range and really looks like a bonfire.

NGC 2024 is an emission nebula, that is, an interstellar cloud emitting in the optical range due to the ionization of its own gas. In the constellation of Orion, giant molecular clouds, consisting mainly of hydrogen, are located closest to the Sun. It is in them that new stars and planets are formed. These clouds lie at distances from 1300 to 1600 light-years from us and represent the most active “stellar nursery” in the vicinity of the Solar System, the ESO clarifies.