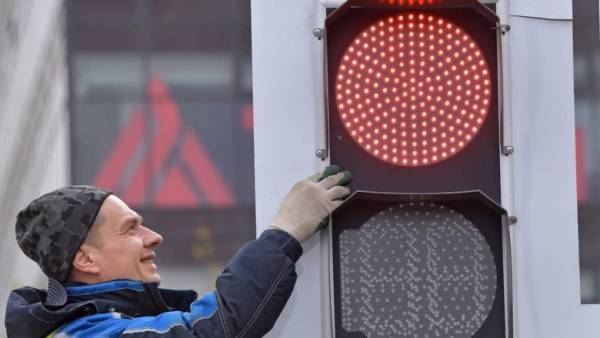 As it became known to Kommersant, the Association of Transport Engineers (unites specialists in the & nbsp; field of traffic management) came up with an initiative to introduce amendments to & nbsp; current GOST 52289. We are talking about & nbsp; standard (mandatory for & nbsp; observance in & nbsp; RF), which sets the rules for the use of signs, markings and & nbsp; traffic lights. Until & nbsp; April 2020, he & nbsp; prohibited the organization of the so-called single-phase regulation at & nbsp; crossroads & nbsp; & mdash; when the car turns right simultaneously with & nbsp; a pedestrian who is crossing the road at this moment.

The ban was partially lifted by the new edition of GOST.

But & nbsp; the introduction of such an order is now possible only with & nbsp; low traffic intensity, when not more than 120 cars turn at & nbsp; hour, and & nbsp; pedestrian traffic does not & nbsp; exceed 600 people per & nbsp; hour. To & nbsp; to & nbsp; the same & nbsp; before & nbsp; turn should be installed traffic light sections with & nbsp; arrow white-moon color. In & nbsp; Moscow there are 50 such intersections, in & nbsp; Yekaterinburg & nbsp; & mdash; 46. ​​

This point of GOST should be made recommendatory, the Association of Transport Engineers believes. She sent a corresponding proposal to the Russian Road Research Institute ROSDORNII (the developer of GOST subordinate to the Ministry of Transport). The initiative is supported by the authorities of St. Petersburg, told Kommersant. in & nbsp; Smolny.

GKU “ Directorate for & nbsp; Traffic Management '' (DODD) of St. Petersburg explained to Kommersant that & nbsp; & nbsp; in large cities at & nbsp; most of the traffic intensity is higher, therefore the current GOST does not & nbsp; allow to introduce joint movement of pedestrians and & nbsp; cars.

But in practice, pedestrians still massively ignore even separate phases, passing the intersection at a red light. At the same time, traffic rules oblige the motorist to give way to a pedestrian in any case, regardless of the presence of a traffic light.

“ The decision (on & nbsp; permission for combined traffic. & mdash; & ldquo; Kommersant & rdquo;) should be made by the authority responsible for & nbsp; traffic organization based on & nbsp; analysis of the transport situation for & nbsp; each specific address with & nbsp; taking into account the statistics of road accidents & raquo;, & nbsp; & mdash; & mdash; & mdash; consider in & nbsp; DODD. This position coincides with the & nbsp; opinion set forth in the & nbsp; appeal to & nbsp; ROSDORNII.

The & nbsp; center made it clear that they might prepare their own appeal on & nbsp; this topic: “ The question is now being worked out. '' The & nbsp; Center for Organization of Movement of Yekaterinburg agreed with the & nbsp; position of colleagues. “ In & nbsp; in any case, the driver must be guided by traffic rules, & nbsp; & mdash; highlighted in & nbsp; institution. & mdash; When & nbsp; turning right or left, the driver must give way to pedestrians and & nbsp; cyclists.

“ The concept of our GOSTs assumes that & nbsp; they describe all ideal cases of traffic organization and & nbsp; the possibilities of using certain tools, & nbsp; & mdash; says the head of the expert center Probok.net Alexander Shumsky. & mdash; But & nbsp; each intersection has its own characteristics, its own geometry and & nbsp; t. The restriction must be removed. ''

The GOST developers have a different opinion.

“ Exceeding the value of the intensity of vehicles specified in the & nbsp; standard will reduce the interval between vehicles, which is safe for & nbsp; pedestrians, & nbsp; & mdash; commented on the initiative in the & nbsp; press service of ROSDORNII. & mdash; And & nbsp; exceeding the intensity of pedestrian flow will make the movement of pedestrians almost continuous and & nbsp; will not & nbsp; allow cars to pass through this intersection. And & nbsp; then & nbsp; and & nbsp; other will negatively affect & nbsp; security.

Kommersant asked for the position of the Ministry of Internal Affairs, but & nbsp; has not yet received an official response. According to & nbsp; Kommersant's data, the department does not & nbsp; support the relaxation of the rules. “ The traffic capacity of intersections is important, but & nbsp; to sacrifice traffic safety to it, we are & nbsp; not & nbsp; ready, & nbsp; & mdash; said & ldquo; b & rdquo; Head of the State Traffic Safety Inspectorate for & nbsp; Tatarstan Lenar Gabdurakhmanov. & mdash; Practice shows that & nbsp; the main number of accidents with & nbsp; injured pedestrians occurs just when cars & nbsp; turn to the right in & nbsp; one traffic light phase at & nbsp; regulated pedestrian crossings & raquo ;.