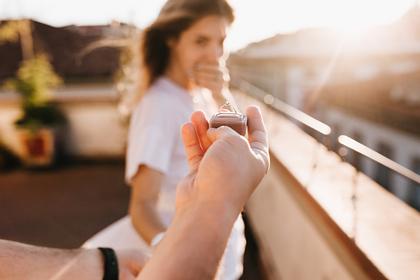 the bride refused to wear the engagement ring he had given him for one reason. To make it, the groom used a diamond from her own jewelry, which she got from her grandmother.

The author of the post said that he has been in a relationship with a girl for about three years. Six months ago, the guy decided to propose to her. According to the narrator, his bride was the beloved granddaughter of her grandmother, who passed away several months ago. An elderly woman bequeathed her diamond ring to her. However, the girl did not wear jewelry and carefully kept it in memory of her grandmother.

“My bride loves jewelry, so I wanted to make the wedding ring special so that it would be very expensive for her,” the guy admitted. He asked the bride's mother how she looked at using one of the diamonds from her grandmother's ring to make an engagement ring. She approved of his idea, but suggested that her daughter might not like it.

“I could not think of anything that would have hooked me more than this idea,” the guy shared and emphasized that in the end he decided to take the diamond from his grandmother's ring. He admitted that to the end he believed that his girlfriend would understand the meaning he put into the ring. According to him, it turned out really beautiful.

“I made an offer. She immediately agreed and was absolutely delighted until she saw her grandmother's ring, ”complained the hero of the story. The girl accused the groom of ruining the only thing that mattered to her, and refused to wear the ring he gave. The guy considered the behavior of his beloved disrespectful, as he tried and spent a lot of money on the gift.

In the comments under the post, most users admitted that the hero of the story did the wrong thing. Many were outraged by the fact that he ruined the only family heirloom that his bride inherited from her grandmother. In their opinion, the guy should immediately return his grandmother's ring to its original appearance, and then give it to the girlfriend.