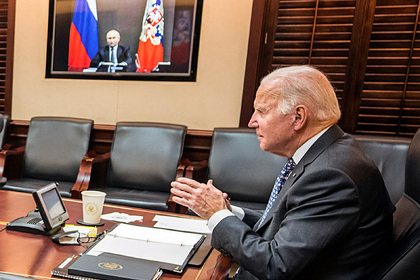 Corden ”on the CBS television channel James Corden ironically spoke about the negotiations between Russia and the United States that took place the day before. The talk show is available on YouTube.

“Sanctions are for life” The US threatens Russia with new sanctions. Who makes these decisions and how? 00:01 – December 1

Ministry of Friendship. Russia is trying to find new allies. Why is it still difficult to do without military assistance and loans? .

“I love that Biden speaks like a pro wrestler from the 80s,” Corden described. He also showed viewers a photograph taken during the negotiations. “Look at Putin – this is the posture of a person who doesn't care,” he said.

The Russian leader contacted the American president from his residence in Sochi on December 7. This contact is the fifth since Biden took office. Following the meeting, Biden welcomed the opportunity to communicate clearly and directly with Putin. Assistant to the head of Russia Yuri Ushakov, in turn, said that the negotiations were of a business nature.

One of the main topics of the meeting was the situation in Ukraine. The leaders of the two countries also discussed the topic of the victims of Russia and the United States in World War II. In addition, the parties expressed mutual satisfaction with cooperation in the fight against cybercrime and talked about the functioning of diplomatic missions. The heads of state did not touch upon such topics as the pandemic, climate and energy, including the situation with the Nord Stream 2 gas pipeline.