In Kuzbass, doctors of an oncological dispensary removed a tumor the size of a watermelon for a Russian citizen 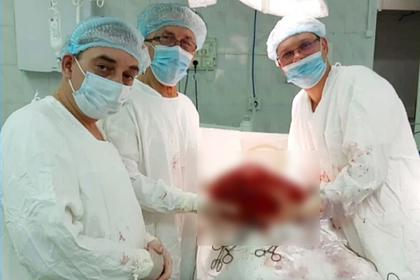 that weighed seven kilograms. The grown tumor was shown in the Instagram account of the medical facility.

They specified that the tumor of a 71-year-old man was 32 centimeters in diameter. The Russian went to the doctors in the summer. “A year ago, he noticed that his stomach began to increase, but he did not feel any discomfort or pain all this time. He only got worried after he saw blood in his urine, “says the dispensary's social network.

Doctors found out that the patient's tumor is located in the retroperitoneal space. She occupied the space from the diaphragm to the small pelvis, and also moved the right kidney to the left.

The man was operated on – he was already discharged from the hospital. Doctors are awaiting test results that will determine the exact type of tumor.

Earlier, in the Novosibirsk regional oncologic dispensary, a 48-year-old Russian woman had three tumors weighing 30 kilograms removed. She turned to doctors for help when her belly grew.