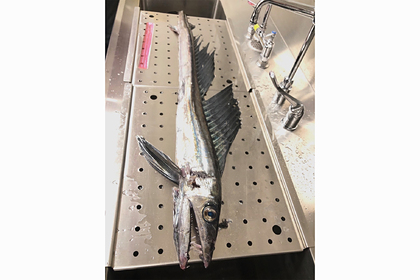 In San Diego, California, for the first time in 25 years found a cannibal fish stranded on the coast of the Pacific Ocean. This was reported on the Fox News website.

Found on Tuesday, November 30, on the beach La Jolla, a 1.2m deep lanceolate fish was handed over to the Scripps Oceanographic Institute for further study. The last fish of this species was discovered in 1996.

Institute employee Dr. Elan Portner said that lanceolate fish have a reputation for cannibals, but only individuals that grow up to one meter in length eat their relatives. He added that this type of fish is considered hermaphrodite – they have both female and male reproductive organs that produce viable germ cells at the same time.

According to Portner, scientists do not know if they can lancelets reproduce on their own, or they need one or more partners to reproduce. It is also unclear whether lanceolate fish live separately or in a school.

Earlier it was reported that in San Diego, California, Jay Bailer discovered “a creature from nightmares” while walking by the ocean. At first he mistook something for a jellyfish, but upon closer inspection, Beiler realized that he was facing a rare species of fish.