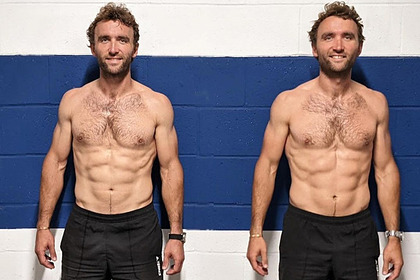 With this they were helped by scientists from King's College London. The subjects were brothers to each other, they are genetically similar, and also have the same appearance, habits and lifestyle. In addition, both of them are subjected to identical sports loads. Before the experiment, they both weighed about 84 kilograms and had a fat mass of 13 percent.

One of them had to adhere to a vegan diet: not eat meat, fish, seafood, eggs, and also not drink milk. The other's diet had to include the maximum amount of meat products. At the same time, the total number of calories received per day should be the same for both, and the physical activity should be identical.

By lot, Hugo fell out on a vegan diet. At the beginning of the experiment, he dramatically lost weight, which subsequently stabilized, and he restored almost all the parameters from which he went on a diet. His weight dropped to 82.1 kilograms, and his body fat decreased to 12 percent. His gut microbiome also changed dramatically, the risk of obesity and diabetes decreased, and blood cholesterol levels dropped, but the likelihood of ulcers in the gastrointestinal tract increased.

Ross, who ate meat, in turn, began to weigh 86 kilograms, body fat increased to 15 percent. His gut microbiome remained unchanged, as did his cholesterol levels.

Observing physicians noted that both diets had their pros and cons. They advised people to choose a diet for themselves based on the goals they plan to achieve.

Earlier it became known that a resident of the Indian city of Mumbai, who weighed 115 kilograms, lost 45 kilograms in three years and gained 10 kilograms of muscle mass.