The user “VKontakte” sells an apartment in the tower “Federation East” for 2.6 billion 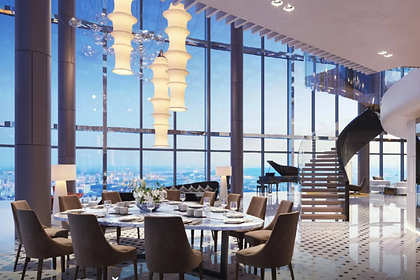 an apartment in the Moscow City business center. The cost of real estate amounted to 2.6 billion rubles, follows from the data of the announcement.

The apartment is located on the upper floors of the Federation East tower. The housing area is 2181 square meters. The layout of the premises is designed for five spaces: front, business, private, children's and office. At the same time, the photos accompanying the announcement show only the design project, the apartment itself is being sold without renovation.

According to the design concept, the front hall will have a lounge area with a bar, a dining room, a music lounge, a library, wine and cigar rooms … The future owner of the apartment will be able to boast of an office with a panoramic wall located in the business part of the apartment.

The buyer is also promised a magnificent view of the capital and the Kremlin from a height of 360 meters – this is above the observation deck of the Ostankino TV tower. The project provides for internal corridors and technical rooms for service personnel, as well as rest and dining rooms.

Earlier in December, experts from the Skolkovo Realty agency named the cost of the cheapest offer in Moscow City. The most budgetary apartment will cost 23.2 million rubles – this is an apartment in the Empire Tower complex on the 40th floor with an area of ​​36 square meters.