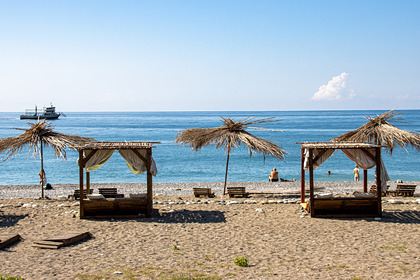 country. The girl's impressions were published by the portal “Subtleties of Tourism” on the Yandex.Zen platform.

As the author said, beach holidays in Abkhazia are organized “extremely poorly”, and there are not very many good excursion companies there. “I can't imagine why to spoil my nerves, vacationing in this country in the summer, and even for crazy money,” said the Russian woman.

According to the girl, the best time to travel to Abkhazia is December, since the citrus season begins. In addition, instead of the popular resort of Pitsunda, the tourist recommended settling in the small coastal village of Ldzaa, which is located three kilometers from it.

“Excellent ecology, just a stunning cocktail of sea breeze, mountain air and the aroma of long-coniferous relic Colchis pines “, – she described the area.

In addition, the Russian woman talked about spending during the trip. So, a week of staying at a hotel with breakfast cost her 22 thousand rubles. She spent another 10 thousand rubles on trips to cafes, souvenirs and excursions, and the tourist paid 6.2 thousand rubles for air tickets to Adler and a taxi.

Earlier in November, a Russian woman visited the Kandyg thermal hot springs in Sukhum (Abkhazia ) and complained of neglect. The infrastructure was very old and shabby, she said. She also noted the mud on the grounds and the silt-covered iron steps to the pools.