Head of Rosoboronexport: India will be offered technologies for the production of the Sprut-SDM1 tank 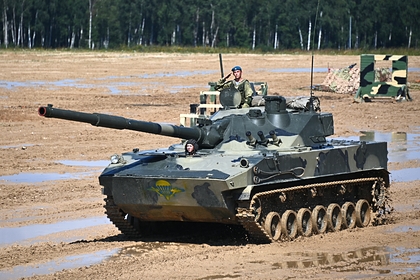 The Russian side will offer India technologies production of Russian light tanks “Sprut-SDM1”. This is reported by RIA Novosti with reference to Alexander Mikheev, General Director of Rosoboronexport.

Rosoboronexport with the Sprut-SDM1 light amphibious tank will certainly take part in the Indian tender for the supply of light tanks and will even offer the transfer of technology and, quite possibly, the localization of the production of individual units and assemblies, “Mikheev said.

The head of the company noted that the Sprut-SDM1 remains the only vehicle in its class that possesses the firepower of the main combat tank. The light vehicle can overcome water obstacles, fire on water and perform tasks in high altitude conditions.

Sprut-SDM1 is equipped with a smooth-bore 125 mm cannon. The tank can use ammunition that is included in the ammunition load of the Indian T-72M1 and T-90S. The vehicle also received a guided weapon system that allows it to hit targets with a missile at a range of up to five kilometers.

In September, the Sprut-SDM1 was dropped from a tower as part of tests that demonstrated the vehicle's capabilities during landing. The machine remained operational under maximum overload conditions.