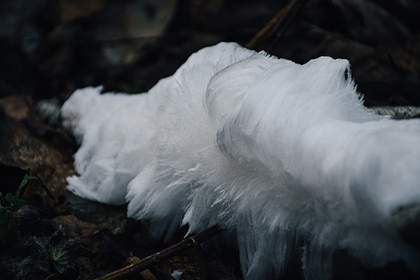 In the Central Forest State Natural Biosphere Reserve, a natural phenomenon called “ice beard”. This is reported by PANORAMApro.

It is noted that “ice hair” can be seen when the temperature at night drops slightly below zero, and the forest is humid enough.

The first phenomenon was described in 1918 by an outstanding German polar explorer, geophysicist and meteorologist Alfred Wegener. He suggested that a certain fungus may participate in the formation of such forms of ice.

In 2015, the phenomenon was studied using modern research methods, this allowed us to confirm Wegener's theory.