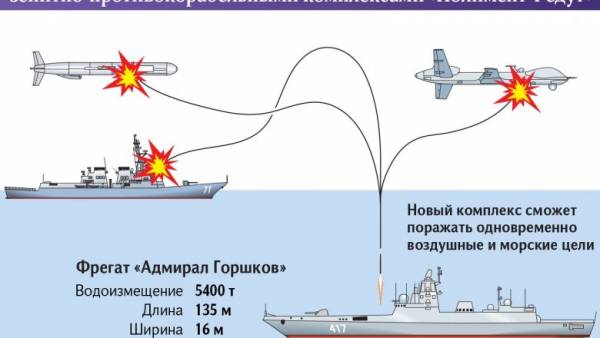 The Navy & nbsp; has already completed a series of tests, where the destruction of surface ships of a conditional enemy with & nbsp; As they told Izvestia sources in the & nbsp; military department, they passed in & nbsp; several stages for & nbsp; for several years and & nbsp; ended in & nbsp; the end of this autumn.

Among others, the frigate of project 22350 “ Admiral Gorshkov '' was involved in them, part of the & nbsp; Northern Fleet. At a certain stage, missile launches were carried out by the Polyment-Redut air defense system. The frigate's crew worked not & nbsp; only launches of anti-aircraft guided missiles (SAM), but & nbsp; and & nbsp; the algorithm of actions during & nbsp; the time of such strikes.

According to the & nbsp; words of sources, all targets were hit, and & nbsp; the work was recognized as successful. Strikes on & nbsp; sea targets were inflicted by several types of anti-aircraft missiles, but & nbsp; their & nbsp; specific names were not & nbsp; disclosed.

The frigate Admiral Gorshkov; actively involved in & nbsp; testing of new weapons systems. From & nbsp; its board in & nbsp; this year, several launches of Zircon missiles were made. The Ministry of Defense & nbsp; already reported that & nbsp; & nbsp; at the end of November, he & nbsp; at & nbsp; once again successfully fired with this rocket from & nbsp; water area from & nbsp; the White Sea at & nbsp; sea target, which was located at & nbsp; a distance of more than 400 & nbsp; p. > Now the & nbsp; navy includes two frigates of project 22350 & nbsp; & mdash; Admiral Gorshkov and & nbsp; Admiral Kasatonov. In total, the & nbsp; same & nbsp; The Navy will receive eight such ships.