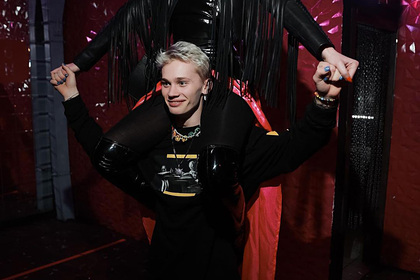 sneakers of the sports brand Nike for hundreds of thousands of rubles. The relevant stories appeared on her Instagram page.

that the celebrity gave Milokhin multi-colored leather Air Jordan 1 Low OG SP sneakers from the brand's collaboration with the popular rapper Travis Scott. The cost of the mentioned shoes on the website of the online store Farfetch varies from 155 to 312 thousand rubles, depending on the size.

Danya Milokhin was born in Orenburg and, at the age of about three, ended up in an orphanage with his brother Ilya. In 2019, the young man registered an account on TikTok, thanks to which he gained fame. Later he moved to Moscow and began his musical career.

In November, Ksenia Borodina presented his mother a Cartier watch for millions of rubles. The TV presenter presented her relative with a gift in honor of the 61st birthday. We are talking about a rose gold Panthere watch, which costs 2.1 million rubles. The product with a quartz dial and movement is decorated with a diamond track.