Ivan Urgant, in an episode of his show dedicated to his grandmother, told several stories about her 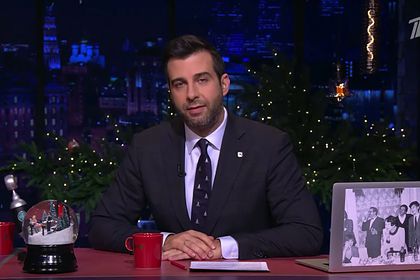 Russian artist and TV presenter Ivan Urgant devoted “On Channel One, to her grandmother, actress Nina Urgant, whose death it became known on December 3. In the program, he told several stories about her and talked with Andrei Smirnov, the director of the film “Belorussky Station”, in which Urgant played the main role. The episode was published on YouTube.

“This is the first time our program will be called” Evening Urgant “. We decided that it would be right to dedicate it to my grandmother, ”said the host.

He said that his grandmother always watched programs with his participation, shared her impressions and even made critical remarks. “She spoke directly, as it is:“ I didn’t like it. I didn’t understand what you said at all. You speak very quickly. ” Or “ProjectorParisHilton” – she did not understand this program at all, because we all speak quickly there. She did not understand [and said]: “I see that you are having fun, okay”, – Urgant recalled.

He also said that the artist did not appreciate the work of her grandson on the theater stage, which she honestly told him after one of his premieres. “She told me in her low voice:“ No, Vanyata, this is not a victory ”,” the actor shared.

Before inviting Smirnov to the studio, Urgant explained how important the film “Belarusian railway station”. “Firstly, this man made a film, on the glory of which my grandchildren will also profit. Secondly, I remember that at some point my grandmother began to say the phrase: “I am already alone from the Belorussky railway station.” Everyone left early, “he explained.

Smirnov said that Urgant was not immediately approved for the role, since officials wanted to see Inna Makarova in the film. The final decision on the samples of the two actresses was to be made by the art council. According to Smirnov, the council was approved by Makarov, after which the director wrote a statement and said that he refused to finish the film without Urgant.

Related materials 00:18 – 19 January 2017 “Your sister, such a fool, didn't learn how to make coffee?” Boris Messerer about Bella Akhmadulina and Mikhail Shishkin about freedom and democracy00:01 – April 16, 2019 ” The world is heading to the devil's grandmother “Ivan Urgant – about the first glass, jokes about Hitler and the most bitter memory

A few months later, he still managed to defend her appointment. “Why was I so holding on to Urgant? Firstly, she is a wonderful actress, I saw her in the theater. Inna Makarova is quite strong, a good artist, but she cannot be compared with Nina, because Nina has a supply of femininity that any woman can dream of and that any man dreams of, “Smirnov explained.

Previously, Ivan Urgant shared his childhood memories of his grandmother. The TV presenter said that she always loved loneliness and did not want anyone to live with her. According to the host, the grandmother was remembered by him, the child, by the fact that she constantly drove a car – in red Zhiguli. In the whole family, she was the only car.

People's Artist of the RSFSR Nina Urgant died at the age of 93 at her home in St. Petersburg on December 3. In 2014, she said that she was diagnosed with Parkinson's disease.