Geneticist François Ballou: in Britain about a thousand people are infected with the omicron strain every day 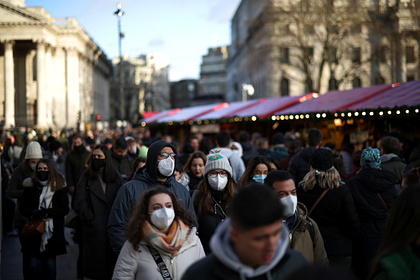 thousands of people, which is significantly higher than the statistics. Francois Ballou, a geneticist from University College London, spoke about this in an interview with Sky News.

“Almost a miracle happened” Coronavirus disappeared in Japan. When this happens in Russia – the biologist answers 00:01 – December 1

“There is reason for panic” What is dangerous about the new strain of coronavirus and what to expect from omicron to Russians? Biologist answers

According to the scientist, the number of cases doubles every three to four days. “Omicron already accounts for about one percent of all cases of coronavirus infection per day, this is about 500 to a thousand cases,” Ballou said.

The geneticist noted that this is not an exact figure, but believes that it is “not far from the truth.” Ballou has placed high expectations in the fight against the new COVID-19 variant on the vaccine. He pointed out that although it does not greatly interfere with the spread of coronavirus, it protects people from the possible severe course of the disease and subsequent complications.

According to official statistics, there are currently 336 confirmed cases of infection with the omicron strain in the UK.

On November 11, a strain was identified in South Africa under the code B.1.1.529, which was named the Greek letter omicron. The country's health minister said that the new option is easily tolerated by vaccinated patients, however, according to some reports, it can bypass the immunity of those who have recovered from other strains. The new strain has been recorded in a number of countries in Africa, Australia, Brazil, India, the United States, the United Arab Emirates, Saudi Arabia and several European countries. Earlier it became known that the omicron strain was also detected in two Russians who arrived from South Africa.