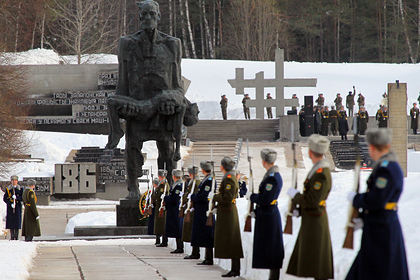 The Belarusian authorities wanted to consolidate the memory of the Great Patriotic War in the text of the country's new constitution. This is how officials want to protect Belarusians from attempts to distort history and glorify Nazism. The relevant plans were proposed by the head of the lower house of the Belarusian parliament, Vladimir Andreichenko, BelTA informs.

“Outright cynicism.” How Poland and Belarus fell out again over the massacre of World War II00: 01 – November 5

there were pieces of skin hanging “60 years ago, 106 children died in a terrible school fire. Why did the KGB hide the tragedy?

“The wide public dialogue that took place in the Republic of Belarus revealed the need to consolidate, at the level of the Constitution and in legislation, the inadmissibility of distorting history and glorifying Nazism,” Andreichenko said at the round table “Historical memory: genocide of the Belarusian people” organized by the state. The event is timed to the eve of the adoption of the UN Convention on the Prevention and Punishment of Genocide.

The parliamentarian stressed the importance of changes in the country's legislation in connection with the aggravated foreign policy conditions. According to Andreichenko, the memory of the events of the Great Patriotic War is important in connection with the migration crisis on the Belarusian-Polish border and the reaction to it in the European Union. “The hybrid war against Belarus, the reluctance of the European Union to admit the truth about the causes of the migration crisis, NATO military preparations leave no doubt that the world has approached a very dangerous line,” he warned.

The memory of the war is regularly used by the Belarusian authorities in as political rhetoric in response to accusations from European countries. In the summer, President of Belarus Alexander Lukashenko said that the Germans “must kneel before the Belarusian people for a hundred years to come and pray.” This is how Lukashenko reacted to the introduction of new sanctions against Belarus.