Prime Minister of Belarus Golovchenko: together with Russia we can withstand any pressure 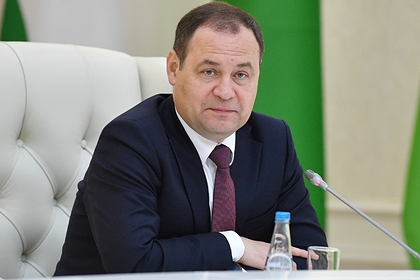 Belarus and Russia together are able to withstand any foreign policy pressure, I am sure Prime Minister of the Republic Roman Golovchenko. The words of the head of the Belarusian government are reported by TASS.

“The initiators of the sanctions against Belarus will not achieve their goals when it is backed by an ally in the person of Russia,” Golovchenko said. In an alliance with Russia, the country can withstand any difficulties, he said.

In the face of “unprecedented” pressure from the West, in Belarus the negative impact is felt more acutely due to its small size, Golovchenko said. But on the other hand, the country feels “behind its back” assistance from Russia, the Prime Minister added.

Golovchenko expressed his views on the success of the joint confrontation between Russia and Belarus and pressure from the West at a meeting with the Russian governor, head of Bashkiria, Radiy Khabirov … Also present at the meeting, President of Belarus Alexander Lukashenko decided to modify Khabirov's political slogan “We can do better!”. “Your slogan, Radiy Faritovich, can be confidently supplemented with the words“ Together we can do better and more! ”,” Said the Belarusian president.

Earlier, Belarus imposed retaliatory sanctions against European and American politicians. Persons who publicly discredit the Belarusian authorities were banned from entering the republic.