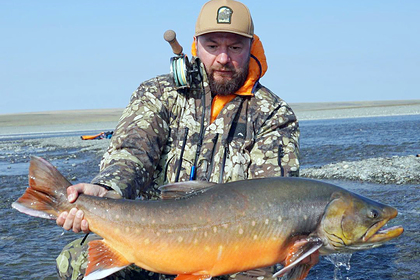 Russian fisherman Ilya Shcherbovich has set a world record for catching Arctic char. This was reported on the website of the International Sport Fishing Association (IGFA).

Lords of the SeasPhotographers showed the extraordinary beauty of the underwater world kilogram Sherbovich caught while fishing in Taimyr at the end of July 2021. It took him seven minutes to get the fish out of the water. After weighing and photographing she was released back into the river. The new record was registered in November 2021.

Sherbovich is the president of the UCP investment group and one of the richest people in Russia. In 2020, Forbes magazine estimated his fortune at $ 750 million. He holds 15 world fishing records, and nine of them are still held. In 2021, he set two IGFA records: in addition to Arctic char from Taimyr, he managed to catch a blunt-nosed trachinote weighing 2.61 kilograms in the Seychelles.

Earlier it was reported that a fisherman from Hungary caught a giant wandering grouper in the Red Sea. His catch was twice the world record.