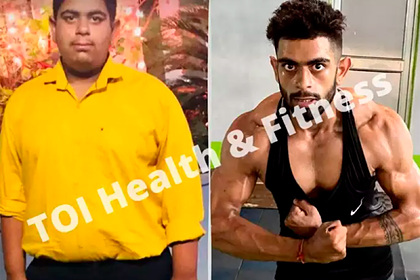 four months and revealed the secret of success in losing weight. His story is published by the Times of India.

Garvit Kavatra said that he suffered from excess weight most of his life. After the weight reached 120 kilograms and began to affect his health and relationships with others, who do not miss the opportunity to play a trick on his appearance, the man decided to pull himself together and change his lifestyle.

For breakfast, the Indian ate a banana or apple and drank a cup of black coffee. At noon, he refreshed himself with carrot juice, and then dined on rice, flatbreads with vegetable stews, or pancakes with vegetables. The man was having dinner with a protein shake with one hundred grams of papaya. After dinner, he had five almonds with a mug of green tea.

Cavatra worked out every day: he went to the gym Monday through Friday, did abs exercises on Saturday, and jogged on Sunday. Before classes, the Indian drank black coffee, and after that he ate 250 grams of paneer curd cheese.

Those who want to lose weight, the Indian advised them not to rely on motivation and pay more attention to self-discipline. He is confident that only a combination of proper nutrition and physical activity can lead to the desired result. Kavatra also recommended recording even small changes in the body and praising yourself for them.

Earlier it was reported that the resident of the Indian city of Mumbai, who weighed 115 kilograms, lost 45 kilograms in three years and gained 10 kilograms of muscle mass. Due to his obesity, the Indian could not play football, although it was his favorite sport.